Excited to check out things to do in Prague? If you’re ready to pack your bags make sure you also check out our tips on traveling to Europe! 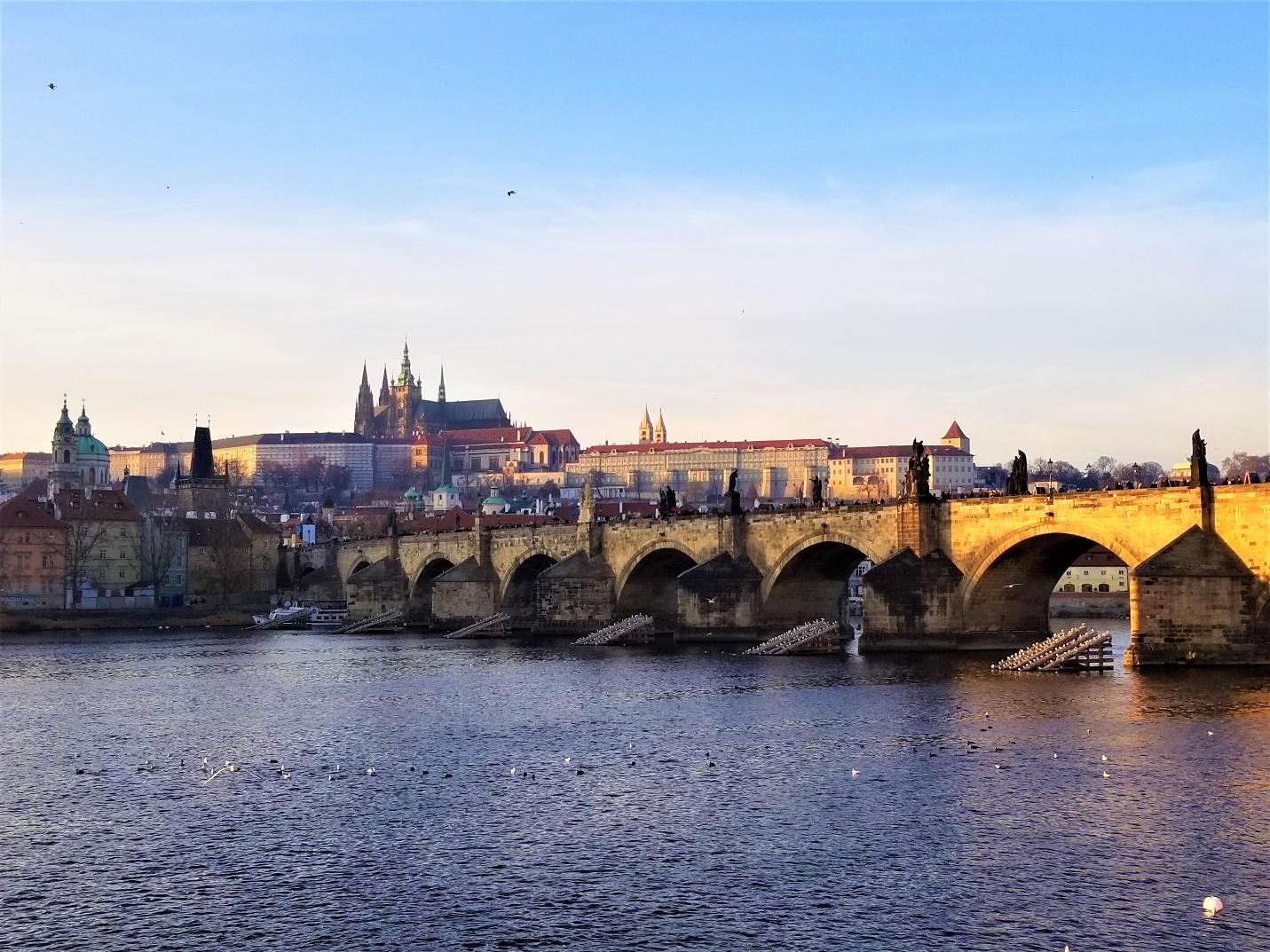 A few weeks ago we were able to visit Prague in the Czech Republic when they were having their Christmas Markets. Prague is a wonderful city that luckily managed to miss a lot of damage from the World Wars. It has multiple beautiful town squares with Christmas shops, castle and cathedrals, plus an incredible Jewish Quarter with multiple synagogues with lots of history about the Holocaust.

Prague was originally set up in four districts or towns. We started our trip at the Castle District up on the hill. Known for where the Prague royalty use to reside, it is also where the current President’s offices are located. The beautiful St. Vitus Cathedral in the Castle District towers over the town. 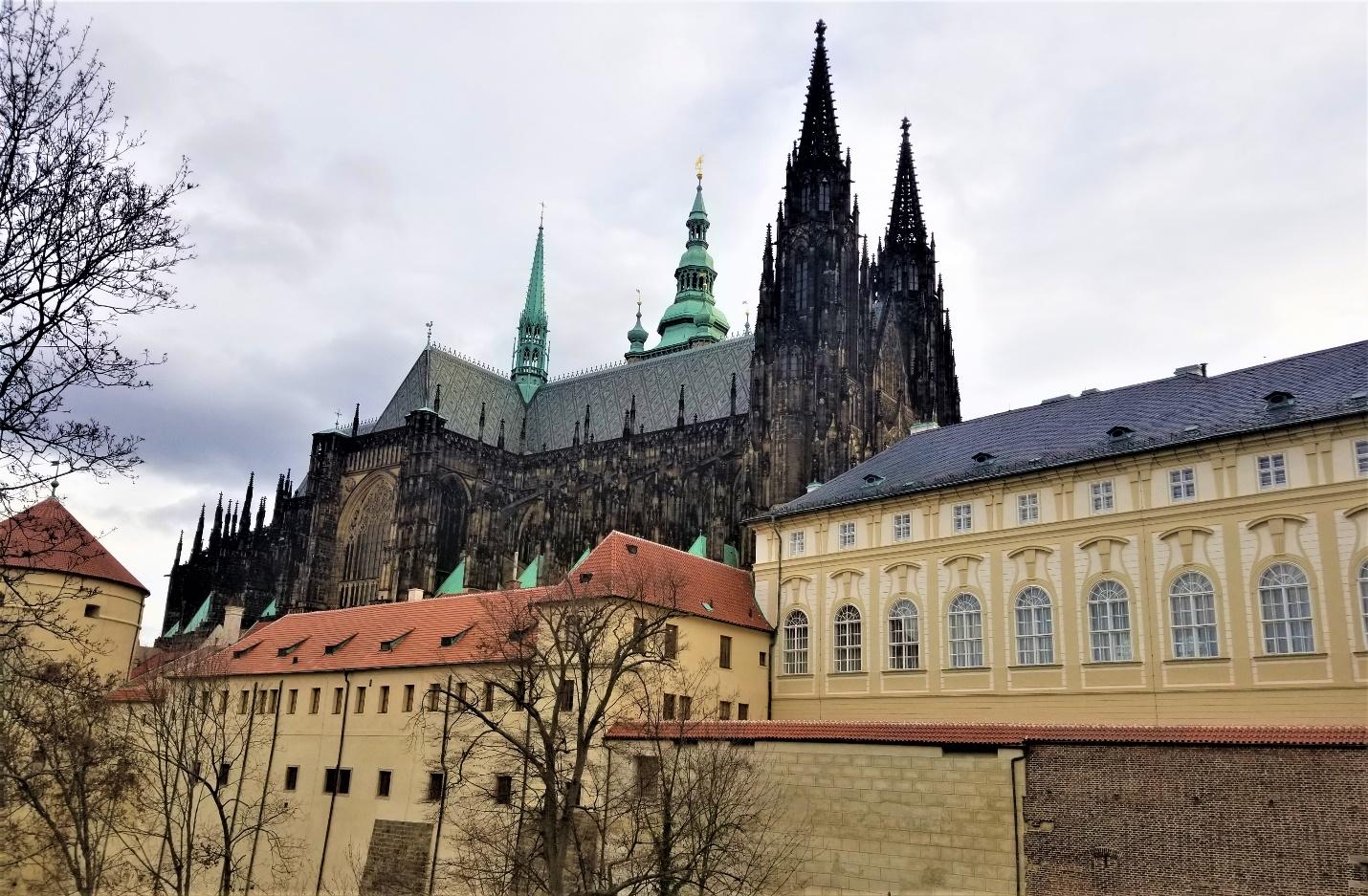 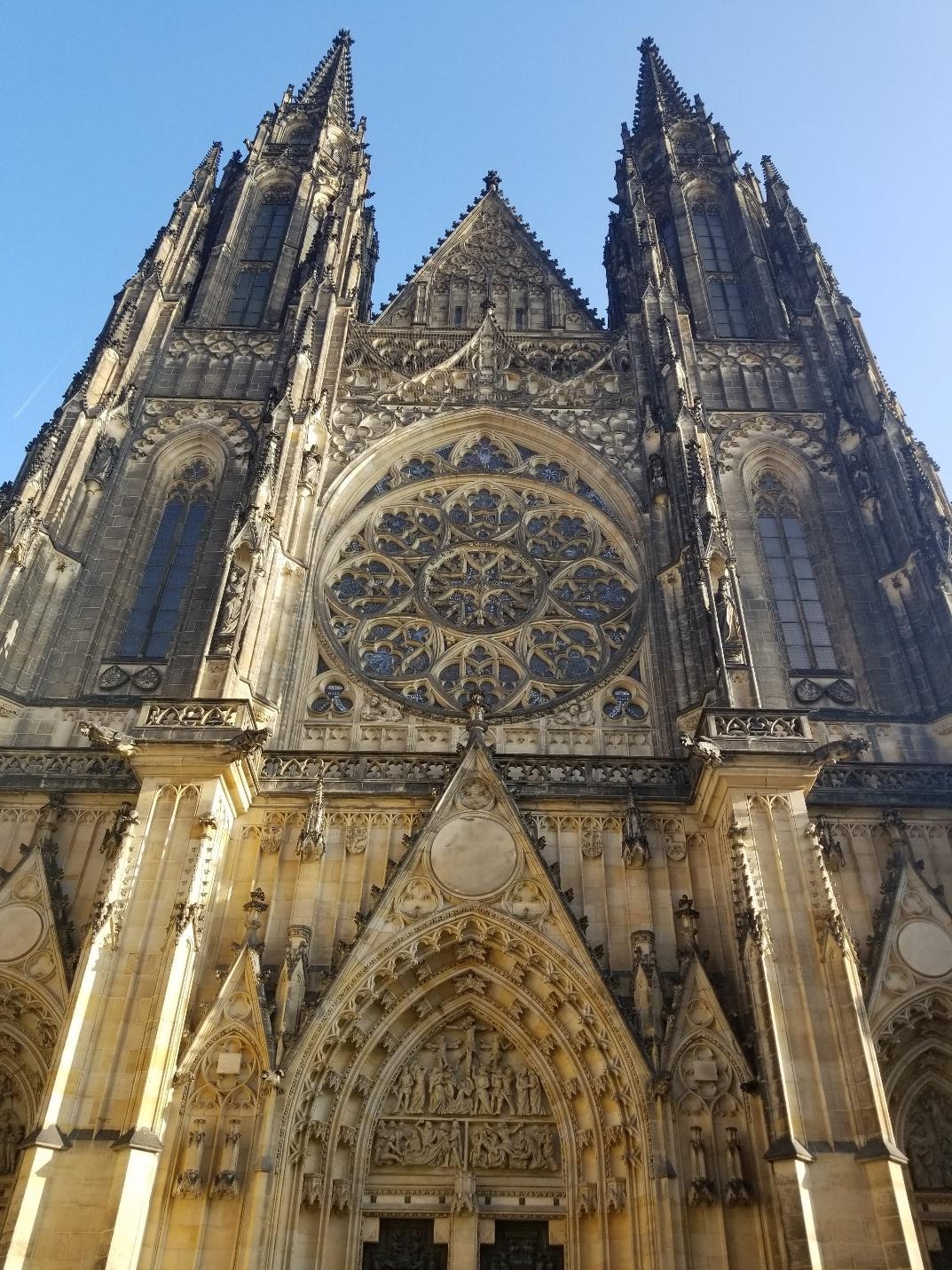 Unfortunately, St. Vitus was closed the day we visited. So we started our tour in the Old Royal Palace. The highlight was the Vladislav Hall. It was used as for markets, meeting room for nobles and even hosted jousts. In the Castle District there is also the Lobkowicz Palace. This palace now houses the current art collection from an old Czech noble family. Basilica of St. George was our next stop in the Castle Quarter and is the burial place of Czech royalty. 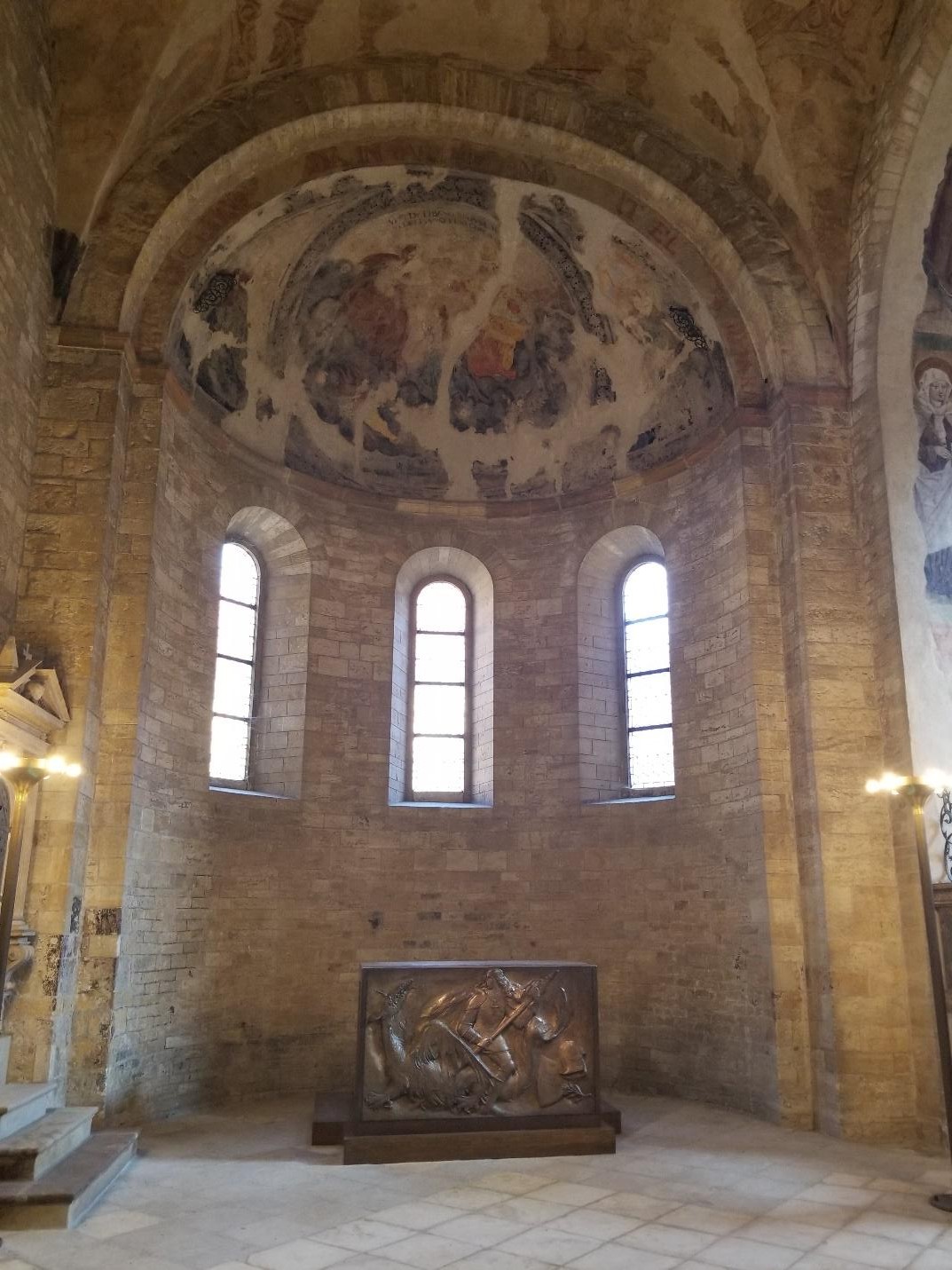 There were also some Christmas shops set up behind St. Vitus Cathedral with some amazing food. Lastly we visited the Golden Lane where at one time tradesmen would set up their shops so they would be close to the royalty. We didn’t think the Golden Lane was anything special but it was already included on our ticket. We also took a quick look into the dungeons at the end of the Castle Quarter.

One of our favorite spots in Prague was the Charles Bridge that was built in the 1300’s. Charles Bridge connects Old town with Lesser Town and the Castle District. This pedestrian bridge was amazing and lined with large statues of the Czech saints. 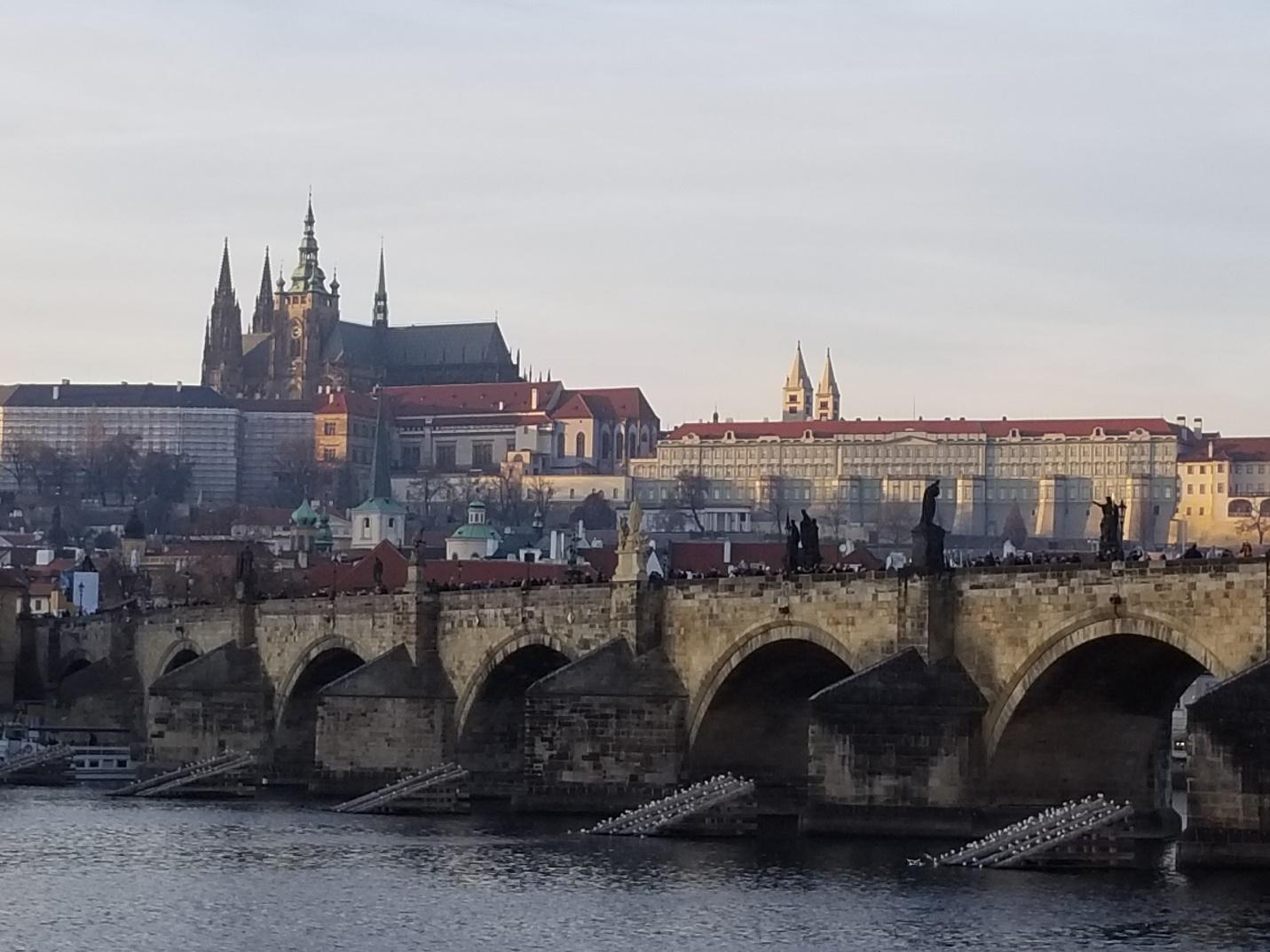 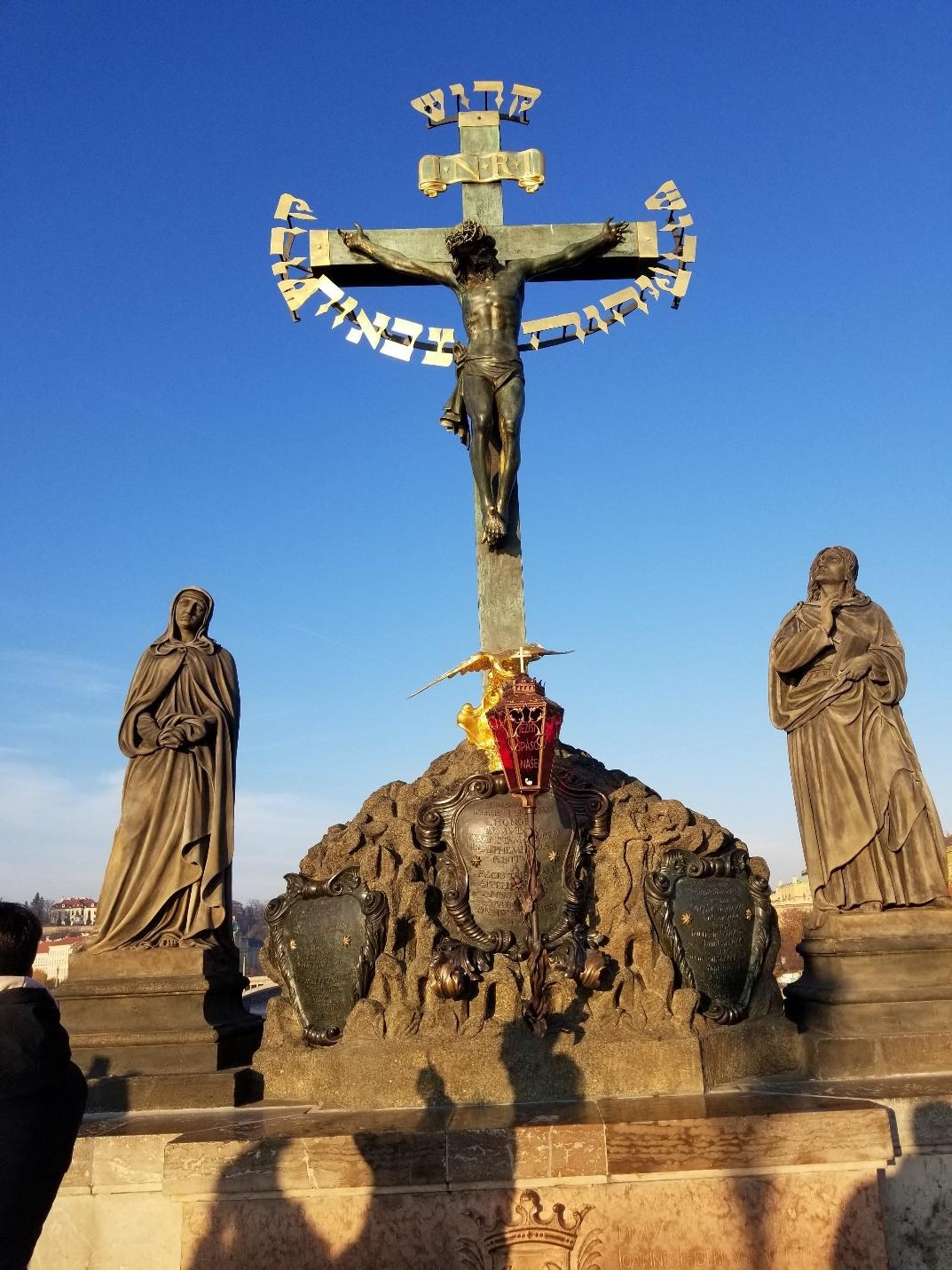 On either side of the Charles Bridge there are large towers that you can walk up and take a look at the entire city. It’s definitely worth paying to go up at least one of the towers. We loved being able to look over the entire city. 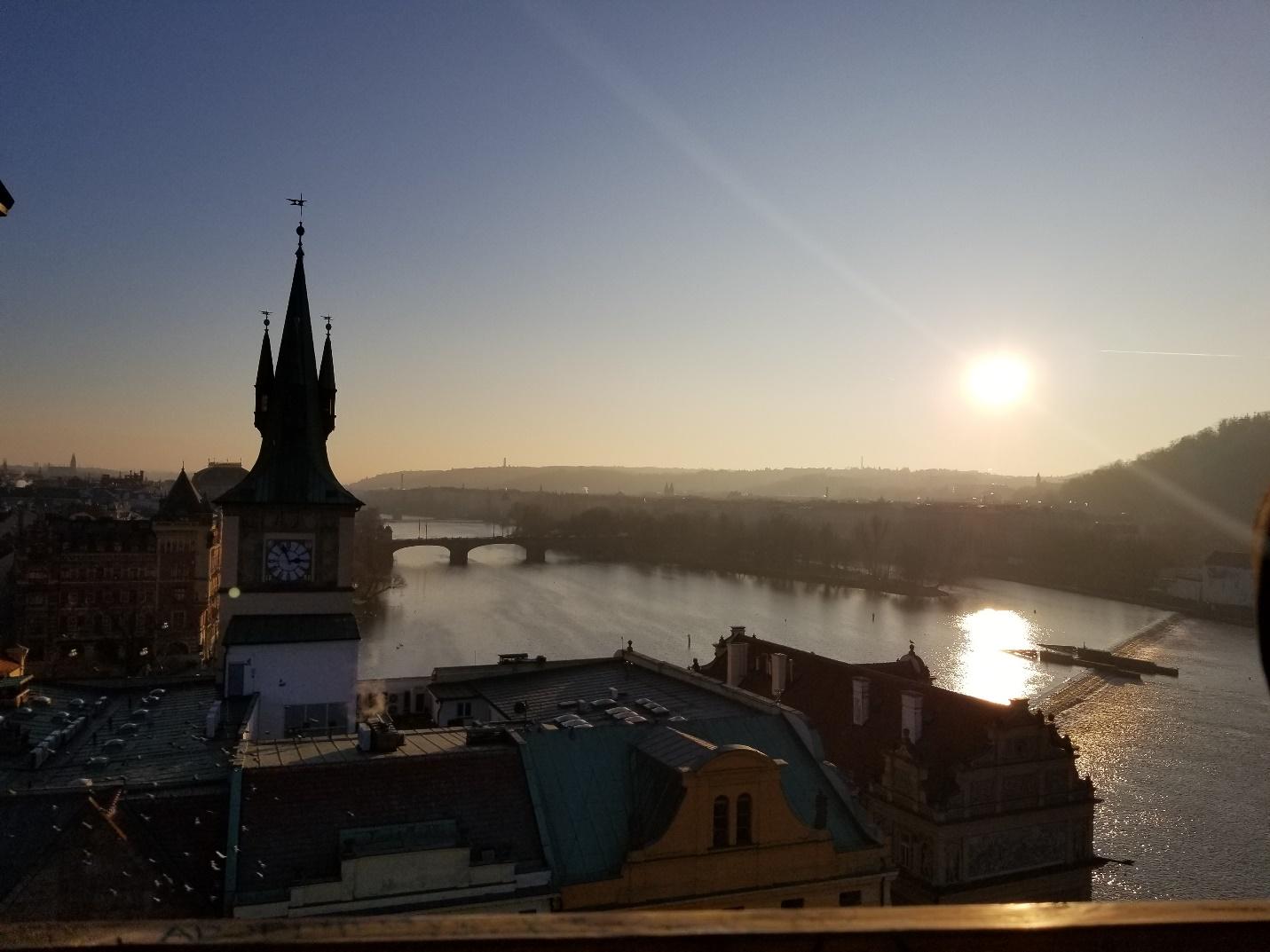 Starting with the Old Town Hall Tower. You can climb the tower and get a great view of the square. On the outside of the tour is the Astronomical Clock. This incredible clock is beautiful but complicated in how it works. 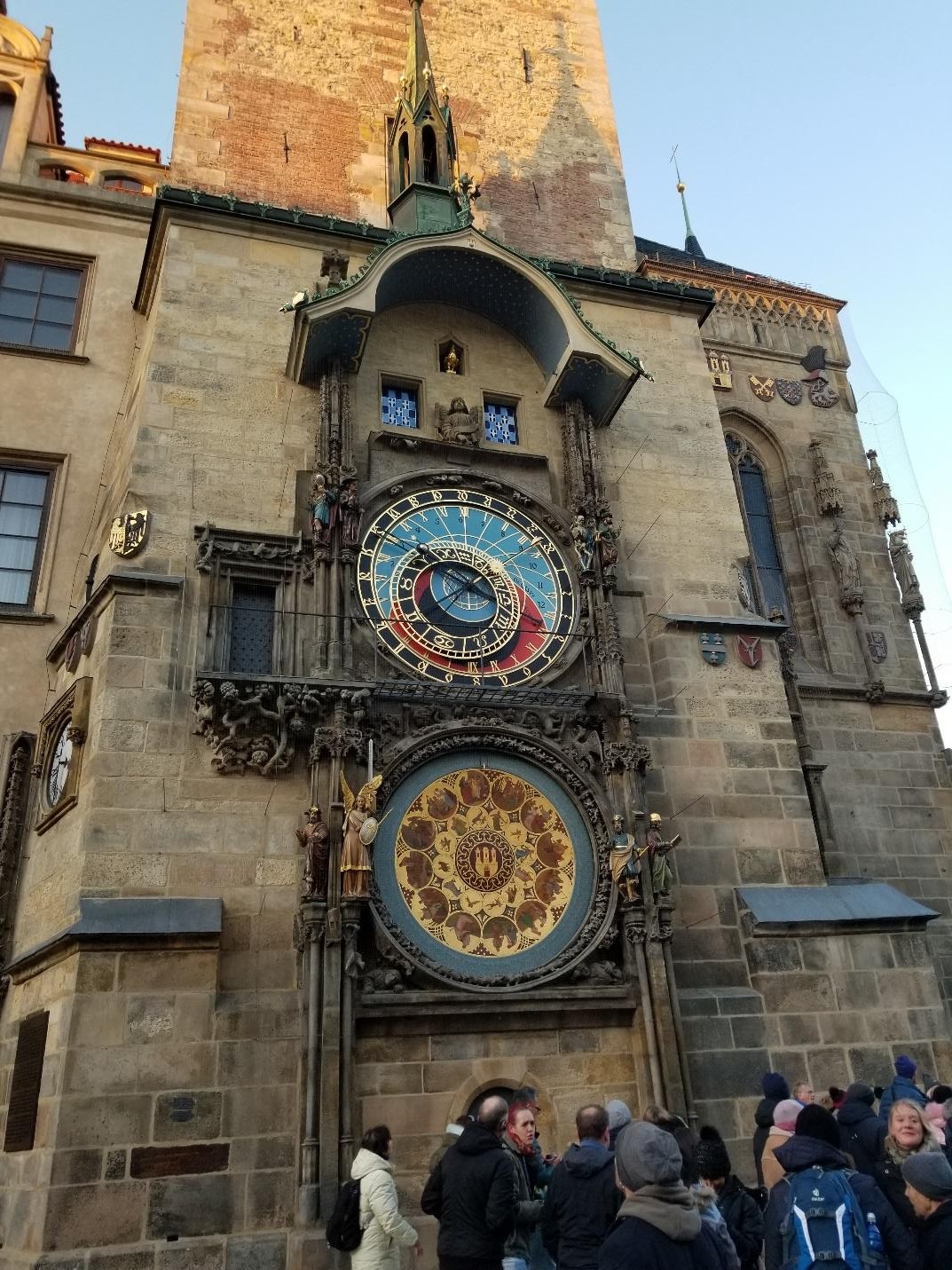 Located around the Old Town Square is also the St. Nicholas Church and the Tyn Church. We loved exploring Old Town Square especially during their Christmas Markets. There was so much delicious food and shops to look at with wonderful dancers and singers as entertainment. 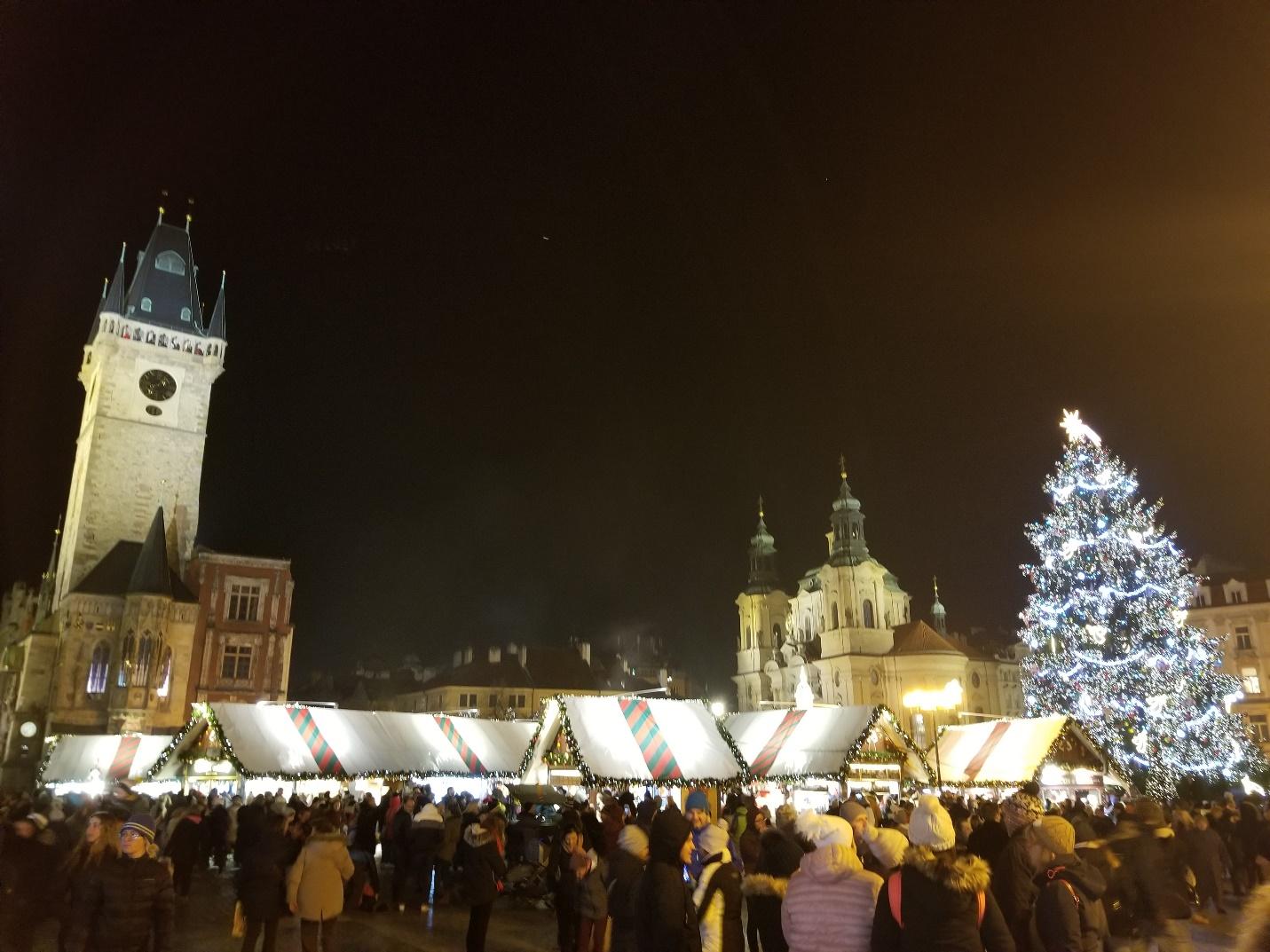 We also enjoyed checking out Wenceslas Square located in New Town of Prague. Wenceslas Square was founded in 1348. This is where many demonstrations, celebrations and other gatherings have taken place including where the Velvet Revolution demonstration occurred. Now it has a lot of shopping and restaurants located up and down the square. 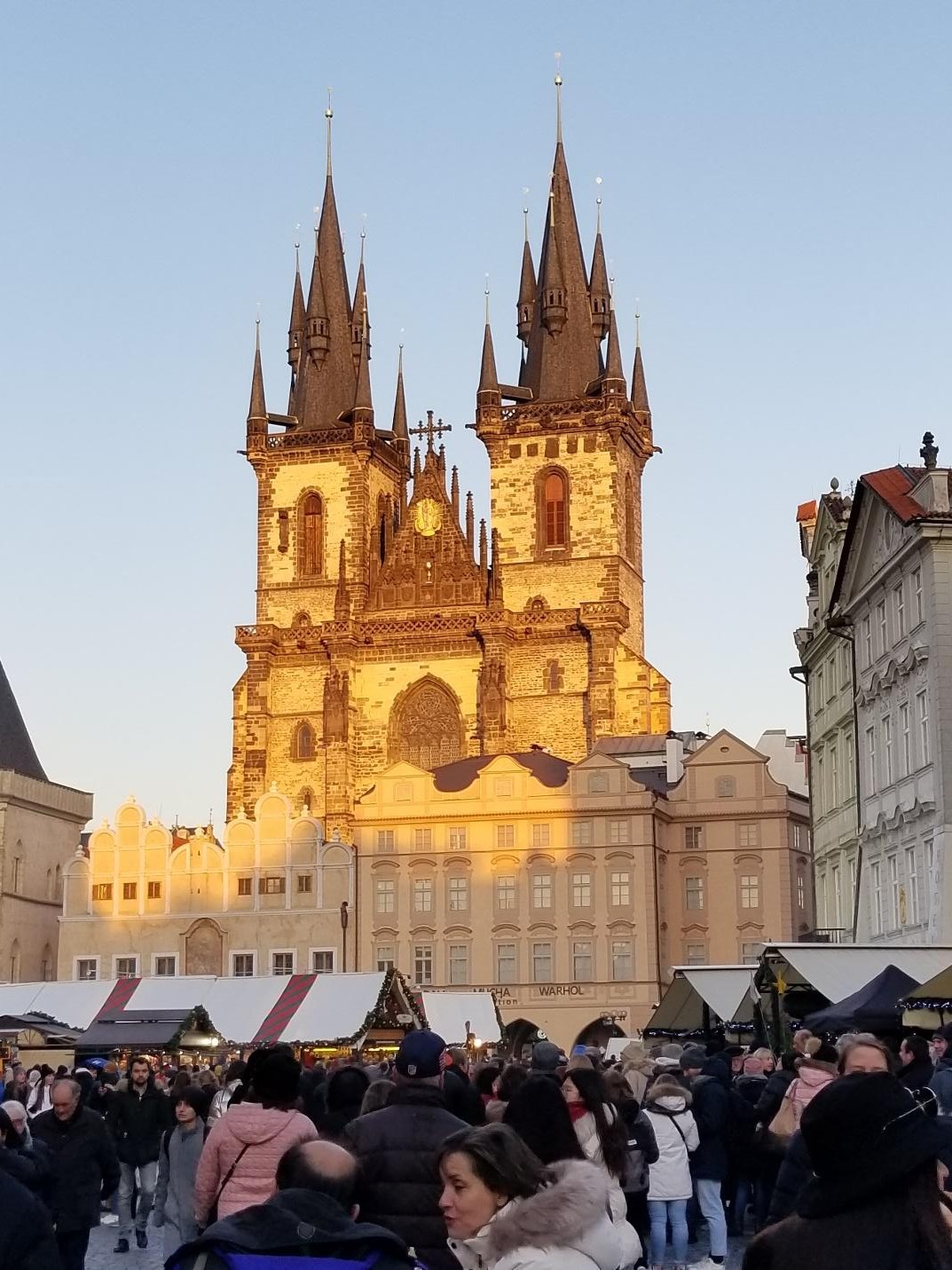 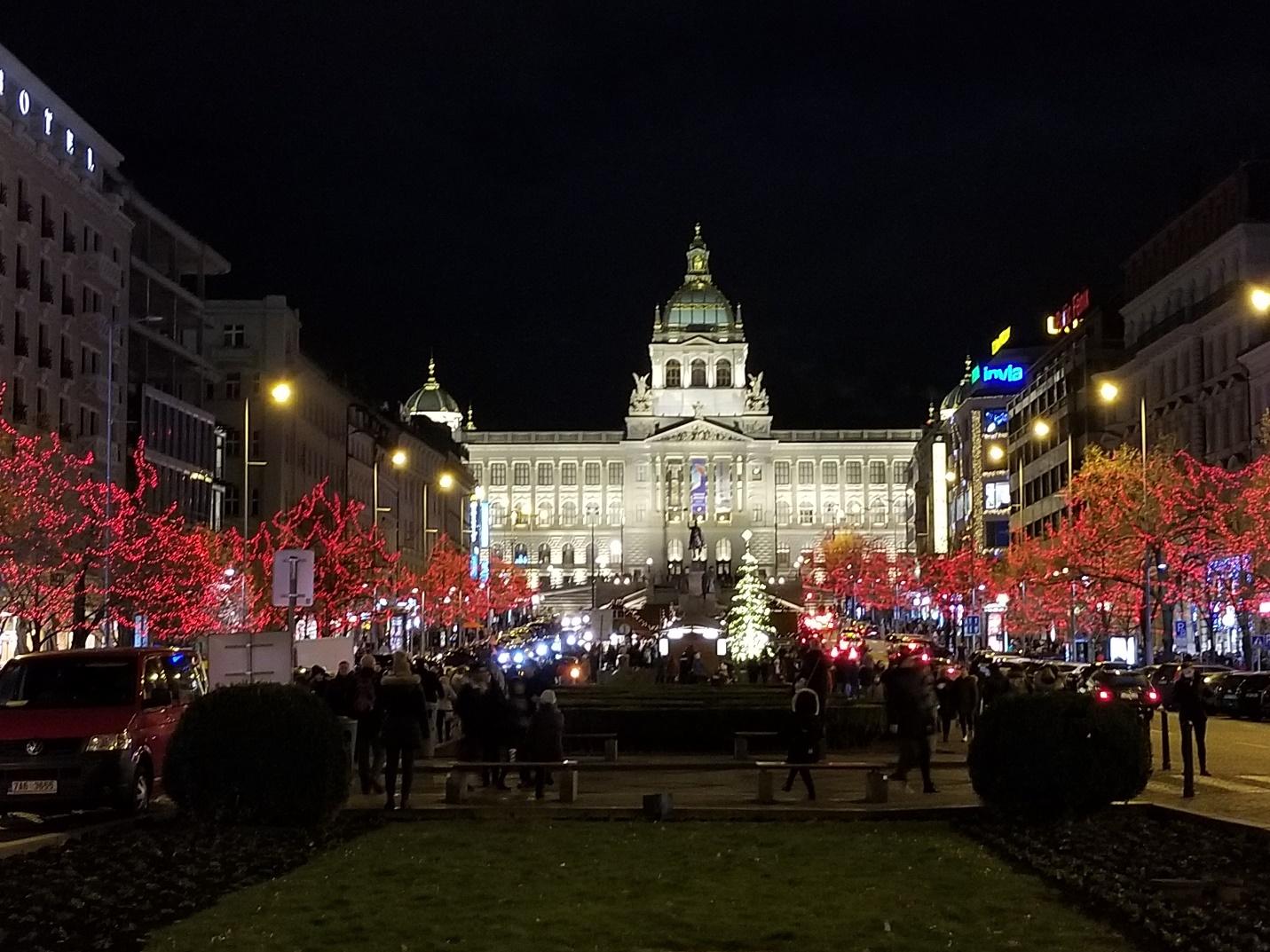 Another part of Prague we thoroughly enjoyed was learning the history of the Jewish Quarter. It started as a Jewish Ghetto in the 13th century when the Jewish people were banished from living anywhere else in the city. In the 19th century they flattened all the buildings and many of the streets were remodeled but all the Jewish synagogues were saved. The Nazis killed most of the Jewish population in World War II. The survivors returned and wrote the names of all those killed on Piksal Synagogue walls. 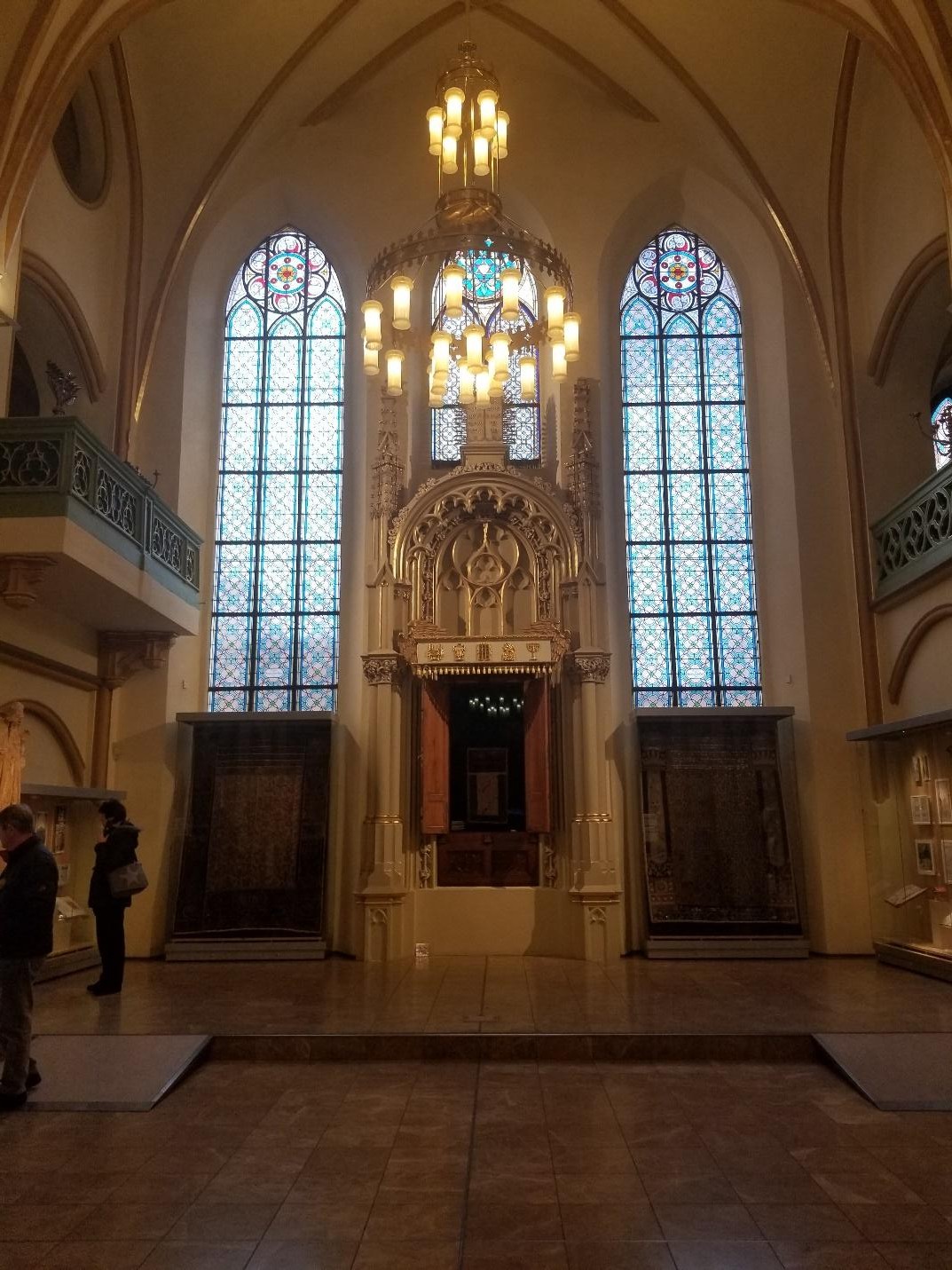 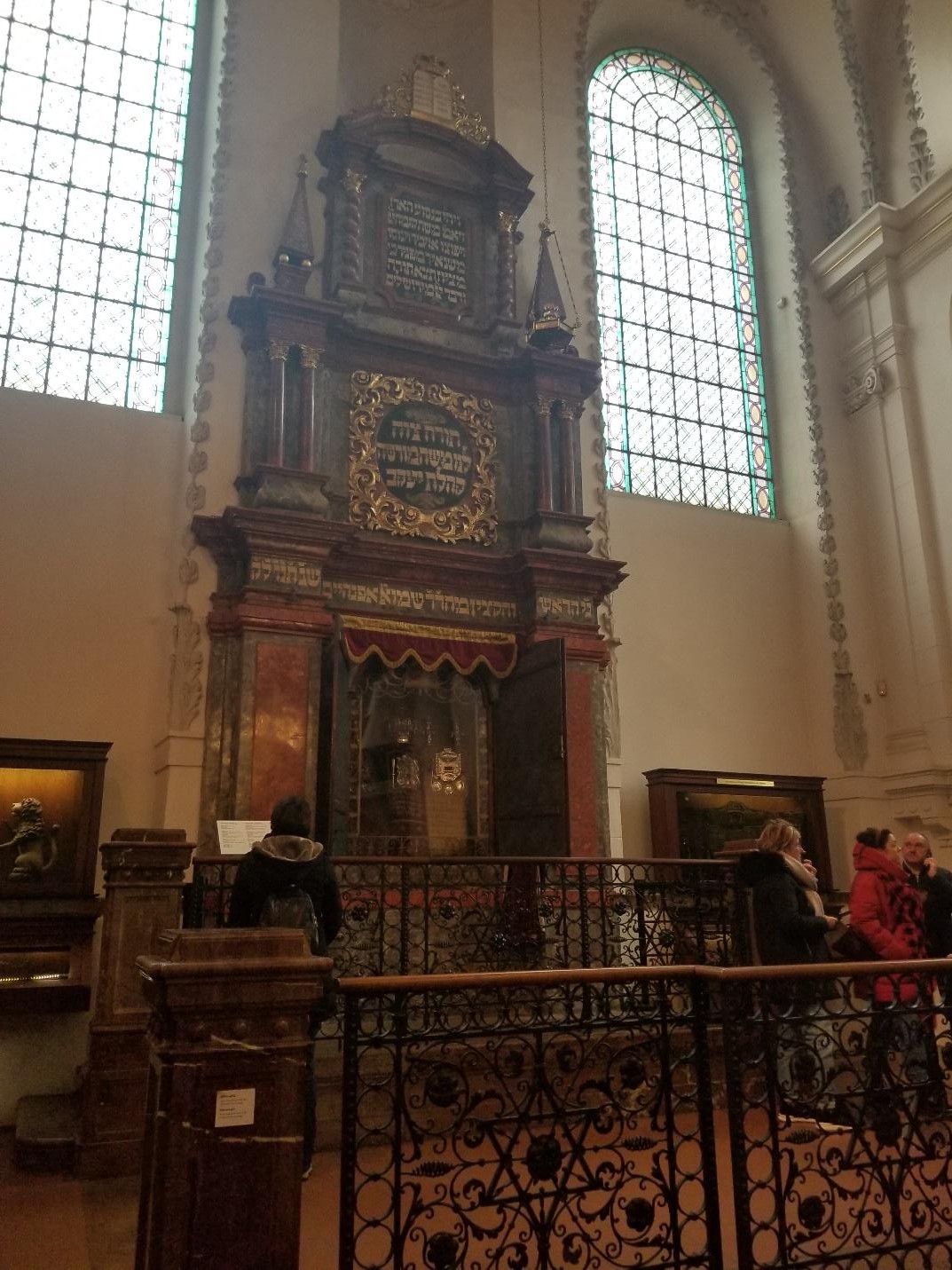 We really enjoyed our trip to Prague and were so glad we were able to explore it during Christmas time. The people of Prague were so kind and welcoming. The city was really easy to walk around through and there was plenty of delicious food and restaurants to enjoy. You should definitely add Prague to your list of wonderful cities to visit. 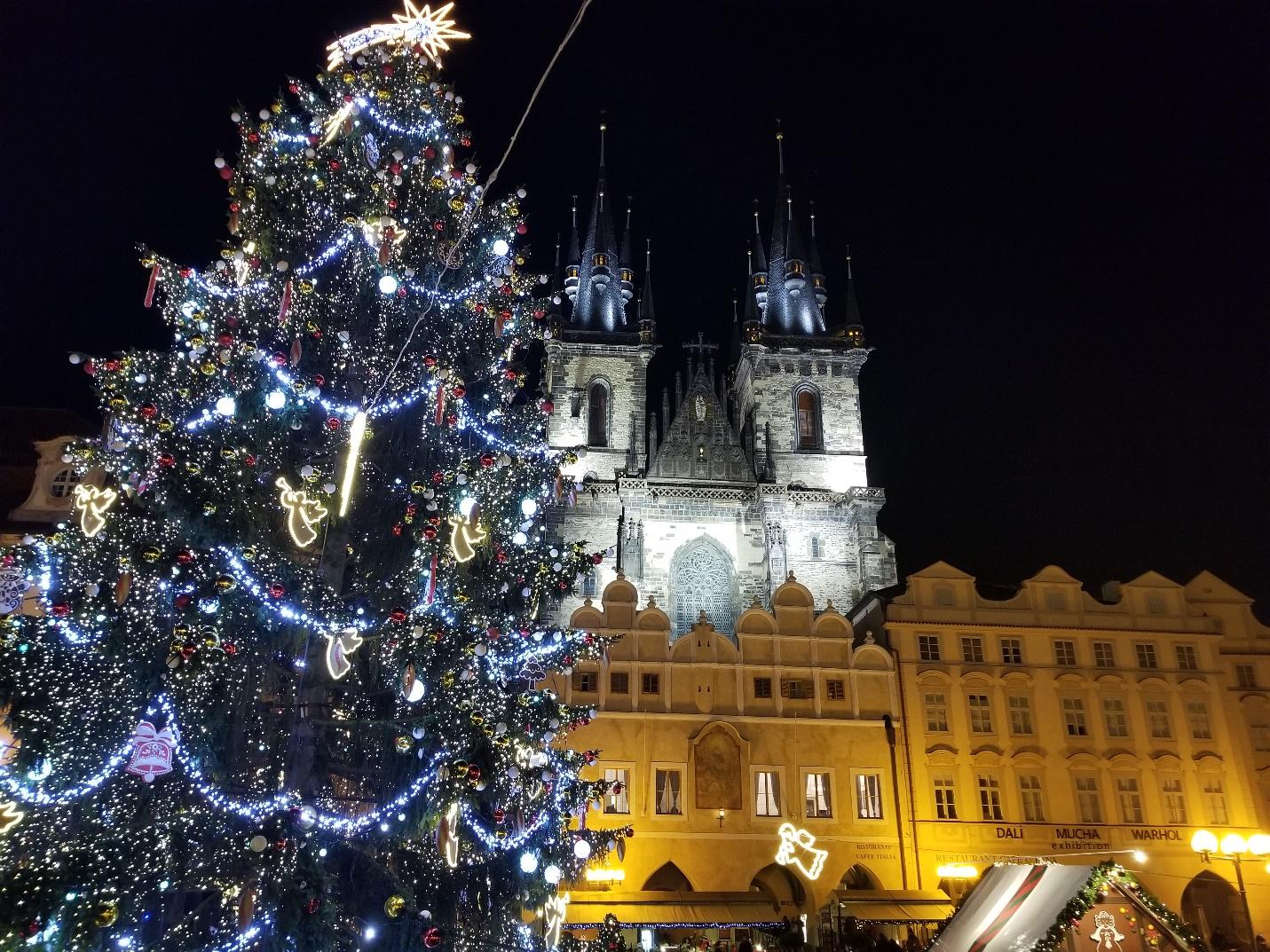