We all have known a bridezilla or four in our adult lives. Maybe we even became one, bending all of our best intentions not to become She Who Inspects the Bridesmaids’ Manicures before game time.

It just happens. The wedding planning becomes a pressure cooker and our future mother-in-law starts questioning whether pink and greige are really a good color combination. We ‘zilla out.

The pressure to plan, to Pinterest, to perform are sometimes just too great. Even the most chill of brides-to-be can buckle. Who can blame her?  With the average cost of a wedding hitting an all-time high of $32,329, according to The Knot 2016 Real Weddings Study, there is a lot of coin riding on the big day. It’s hard not to flip your mood while practicing flipping your veil.

What I don’t understand is how frequently I have been the confessor to a whole other member of the wedding party, though. The Burned Bridesmaid seems to be more often the rule than the exception. She comes in many forms and wears many faces and many, many sequins on her dresses. What she has in common with every other Burned Bridesmaid, though, is that she is taken advantage of in one way or another–and in a way that does serious damage to her relationships. 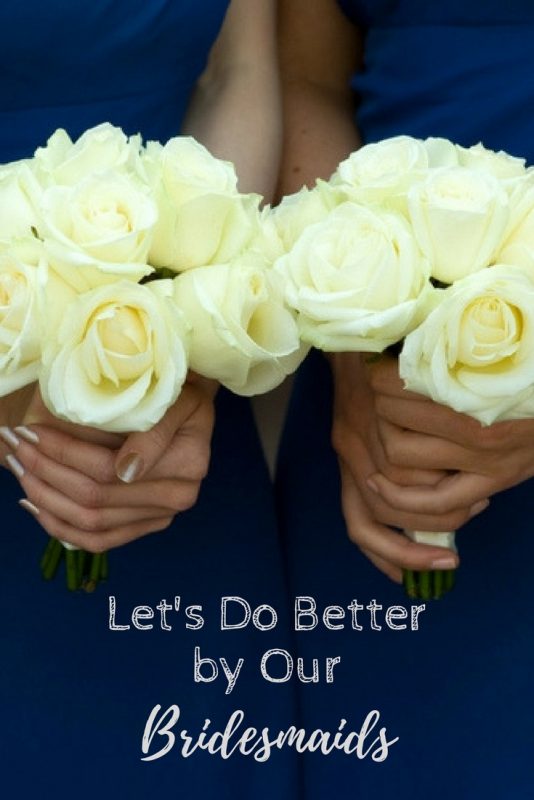 In fact, the trope of the Burned Bridesmaid is well-documented. You have Jane, played by Katherine Heigl in “27 Dresses,” a movie about a serial bridesmaid who is tapped by all her friends for the high calling of bridesmaid. Jane never says no, even to “wedding double-headers.” Jane is a cautionary tale about boundaries. And boundaries are key to not becoming the Burned Bridesmaid.Bridesmaids, by virtue of the role that they play, accompany the bride throughout all the activities during her biggest day. They are selected to assist with the all-important fluffing of trains during pictures, and to hold the delicately arranged bridal bouquet during key moments of the ceremony.

It seems, though, that the day-of activities are not the culprits for producing the Burned Bridesmaid, though. It’s all the peripheral activities. The bacheloretting and showering and pre-partying and post-brunching that seem to exhaust all the Good Bridesmaid reserves. Bridesmaids are constantly expected to pony up the cash to not only lavish the bride with all manner of garter belts and gifts, but to fly hitherty thither all over creation for all the attendant functions of getting married. They are oftentimes not acquainted with the other members of the bridal party but are expected to plan big endeavors in the bride’s honor via private Facebook groups. Y’all? It’s just too freaking much. It wasn’t always this way. Trust. In the year 2005 when I was married, in a practically Cenozoic era known as the pre-Pinterest, pre-Instagram wedding planning age of darkness, the pressure to invent an original wedding hashtag was nil. I don’t think I had a bachelorette party, unless you call going on a day hike with my future husband and future bridesmaid a couple weeks before the wedding a bachelorette party. I also didn’t have a bridal brunch after our wedding. Unless you call my sister driving my shiny new husband and me to the airport for our honeymoon while I rooted around in my backpack for my passport–was that the bridal brunch? Somehow we still had an amazing time and we are still in touch with all of our wedding party attendants. It hurts my heart that so many brides and bridesmaids cannot say the same, however. Having listened to many a Burned Bridesmaid, it seems to me that bridges can be rebuilt, eventually, but why not try to avoid burning them in the first place?

I offer a few final considerations for those who tread down the aisle. Whether you’ll be wearing all white or dazzling sequins, remember this:1.These are your family and friends. As the bride, do whatever is in your power to ensure that this stays that way. 2. Money trees are not real, but budgets are. If a member of the bridal party waves her hand and says, “Sorry. A bachelorette limo isn’t in my budget. Can we Uber-X it for the bar crawl?” then offer to cover for her share or go with her suggestion. A bridesmaid who is both mindful of her budget and willing to offer an alternative solution is the one you’re going to want to keep as a friend for many years to come. 3. Sorry involves two syllables between two people. You might ‘zilla out on your bridesmaids if you’re the bride. You might forget to fluff the train for one critical picture if you’re the bridesmaid. We’re all human. But as humans, we have the power to apologize. Whether that comes in a thoughtfully penned card on your new married-name stationery or in the form of a heart-to-heart post-nuptial conversation, the important thing is that we access our ability to say we’re sorry when we’ve done wrong by a dear friend.

Whether we’re the bride or bridesmaid, the important thing is not in the great dress we get to keep (or the really unfortunate one that is now occupying prime closet real estate) but in the friendships we hold onto, ‘til death do us part.

Kendra I just love this input. I have been a burned maid-of-honor cashing out hundreds of dollars. When it came my time, I asked all five of my bridesmaids to divide the typical role of a maid of honor into equal parts so that each had a special part to play without spending a ton of money. One arranged and facilitated my boudoir, another my bachelorette party, another breakfast and coffee the morning of the wedding, another the honor of standing by my side and giving a speech, and finally one other who handled all of the post wedding arrangements including dress, cake, etc. getting back to the house. Whatever a bride does, I full-heartedly agree - go easy on people. Money doesn't grow on trees. And typically, what you expect from someone will be expected from you one day.

The dividing of "duties" according to each bridesmaid as asked by the bride makes it so special. It's something that she will always share with you. I think that is a wonderfully intentional way to make each feel wanted and appreciated.