Have you heard that cloth diapers are making a comeback and found yourself wondering why? Have you been considering using cloth diapers, but find yourself overwhelmed with all the new terminology and different kinds of diapers? Either way, we’ve got you covered. This article will break down the main types of modern cloth diapers, and explain the pros and cons of each. 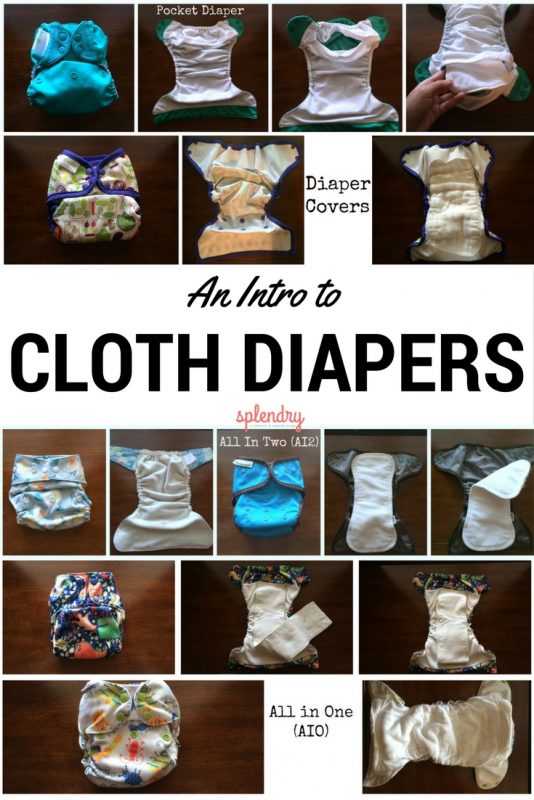 If you’re picturing diaper pins and plastic pants, you’re in for a surprise. Modern cloth diapers are convenient, easy to use, and come in adorable colors and prints. Most diapers are made up of an absorbent interior and a waterproof outer. The main diaper styles are all in ones, pockets, all in twos, and covers. Let’s take a closer look at each.

All in one cloth diapers are diapers that contain all the parts in one easy package. All of the absorbent parts are connected to the waterproof outer. This makes an AIO diaper the most like the disposable diapers you’re probably familiar with. With an AIO diaper, you just put the diaper on and go. When it’s time to change, you can just toss it in your diaper laundry. Super simple! Unfortunately, this convenience comes at a cost, as AIOs tend to be the most expensive type of diapers to buy. They also take a little longer to dry, since all the absorbent layers are in one piece. But for plenty of moms, the convenience of AIO diapers can’t be beat!

Pros: easy to use, all one piece

Pocket diapers are similar to an all in one diaper, but the absorbent inners are not attached to the diaper. Pocket diapers consist of a waterproof outer that is lined with a soft material, usually microfleece or suedecloth. These materials let the wetness pass through to the absorbent material inside, while keeping baby’s skin dry. The lining contains an opening (or “pocket”) that you stuff with absorbent materials.

One thing people love about pocket diapers is that since the absorbent parts aren’t attached, you can actually customize the amount of absorbency your baby needs. Have a heavy wetter? You can easily add more absorbency in the diaper. Also, once the diapers have been stuffed with the absorbent material, they essentially function as an AIO; you can just put the diaper on and go. Pockets tend to be cheaper than AIO diapers, and also dry more quickly. The biggest complaint about pocket diapers is that you have to stuff the absorbent material into the pocket every time you do laundry. For lots of moms, stuffing gets old quickly. But for many, the cost savings make up for this minor inconvenience.

All in two, or “hybrid” diapers are halfway between an AIO and a cover. These diapers consist of a waterproof cover and some form of inserts. Typically the cover also contains snaps inside to hold the inserts in place. Many parents like these diapers because if the outside cover (or “shell”) doesn’t get dirty, you can remove the wet insert, snap in a new insert, and reuse the shell. This can make the  AI2 a more cost effective option than an AIO.

It’s also a popular choice for diaper bags, as this diapering system tends to take up less room than others. Also, if you purchase an all in two system and decide you don’t care for the inserts, the shell can just be used as a cover with whatever inserts you prefer. However, some parents find that the snap in inserts on AI2 diapers can shift around and “bunch up”. For this reason, some people don’t like them for older, more active babies. Also, if the diaper is dirty, the insert may not contain it and then the cover gets soiled, and cannot be reused before wash day. But for many parents, these hybrid diapers combine the best of all the diapering systems.

Diaper covers are simply waterproof covers that do not contain any attached absorbent materials. The absorbent cloth is placed on the baby separately, then a cover is added as a waterproof outer layer. Covers can be a part of a very versatile diapering system, since you can use basically anything absorbent inside of it. Popular choices include fitted diapers (a diaper made of only absorbent materials that requires a cover to be waterproof), flats (a large square of fabric that you fold around baby), and prefolds (a smaller square of fabric that has already been folded into layers). Some thrifty parents even use their old flannel receiving blankets inside a cover, or flour sack towels from the kitchen.

This type of diapering probably has the steepest learning curve. There are a few more steps to it than just “throw it on and go” like you would get with an AIO. Covers, like AI2 diapers, are often reusable if you allow it to air dry between changes. This makes covers the least expensive way to cloth diaper. Some estimates show that if you only use flats and covers, you could diaper your baby from birth to potty training for less than $200! Some non-cloth diapering families even use covers over disposable diapers to help prevent “diaper blowouts”. If you’re looking to save money diapering, and don’t mind a few more steps during changes, covers are a great place to look.

Cloth diapers offer a wide range of options, probably more than most parents would have expected! There are even more choices than what has been covered here, but hopefully this look into the basics has helped you learn a little more about the wonderful world of cloth diapering.