Nothing sounds better to me on a cold night than a bowl of hot soup. Probably one of my favorite things about soup is that making one is usually really easy! In fact, this soup came about one night when I was low on time and hadn’t been grocery shopping in a while. I had a couple cans of white beans, so I threw some things together and this white bean soup turned out delicious! The ingredients listed below are what I used, but feel free to adjust to your liking!

I chopped up some baby carrots (since that’s what I had) and sauteed them with some butter until they were soft, but still a little crunchy (I don’t like mushy carrots). If you were adding onion (which I didn’t have) you would saute it with the carrots. I then added the water, salt and pepper. I mashed up the can of Navy beans using a potato masher (it gave the soup a nice consistency) and then added the other can of Great Northern Beans (un-mashed). And you could certainly use “real” ham, but I went with what I had and tore up some slices of deli ham! I threw in a Bay Leaf (I really don’t know why other than it seems like every soup like this I’ve made in the past had a Bay Leaf in it). I let it simmer for about 15-20 minutes until it was nice and hot and then served! I seasoned with a little more salt/pepper to taste. 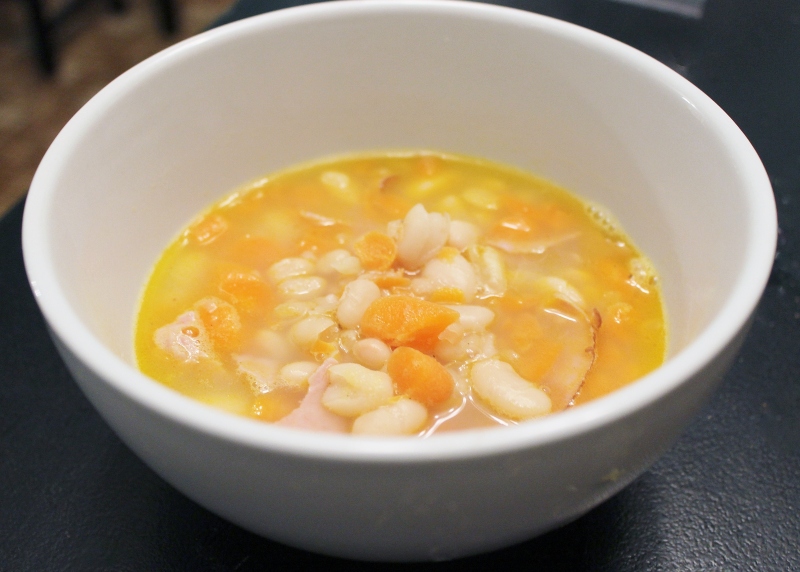 I really love this soup! It’s easy, filling, and my husband even liked it (and he’s not a soup person). I had it for leftovers the next day and thought the taste was even better!