You may adore preparing meals but I don’t really possess that gene, so cooking for me is generally just done out of sheer necessity! Let’s get this straight – if I post a recipe, it’s going to be something easy and fast because I’ve got other things to do!

Last night my husband called and was headed home three hours earlier than I expected him. (I thought he wouldn’t be home until really late.) I admit, there was a small part of me slightly annoyed. Not that he was coming home, but that he would now be arriving before his expected 10:00 PM time, and would probably be hungry. Ugh, how inconsiderate, right? I know he would have fended for himself (and he does, a lot), but I felt like it would be nice to attempt some sort of actual meal. My solution? Loaded potato soup! It’s cold out, I had potatoes, and yeah, that was about my logic. 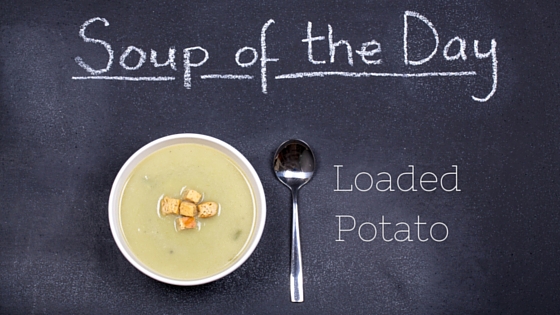 I took a chance on throwing some things together and it actually worked out REALLY well! I definitely could cut the recipe in half because this provided a LOT of soup! So, keep that in mind if you are cooking for one or two.

Here’s what you need:

This recipe would probably only take about 15-20 minutes if you already have your potatoes cooked. I was not prepared, of course, so it probably took me closer to 35-40. Once I was down to my last group of potatoes to microwave, I started the soup.

1. Place a medium size pot over medium-high heat and let the butter melt. As it is almost melted, add the flour and stir with a whisk until well combined.

2. Slowly pour in the chicken broth and continue stirring with whisk. Add the sour cream and cream cheese and stir until it is smooth (I still had some tiny flecks of cream cheese/sour cream.)

3. Slice open the potatoes and peel the skin off, or remove the insides with a spoon. Add potatoes to soup and use a masher or spoon to get them to the right consistency. I left lots of small chunks.

4. Add cheese and stir until melted. (Add in bacon if desired)

5. Season with salt and pepper

6. Garnish with more cheese and serve!

I served this soup with salad (Marketside Bacon Caesar, to be exact. It comes in a bag all ready to toss and it’s delicious!) and my husband really liked it! I also had it today for lunch and I’m pretty sure it was even better!  Like I said before, I could have easily cut my ingredient measurements in half and it would have been plenty of soup for the two of us!