Every day, new books and films are being released for fans to enjoy, and sometimes, we get double the pleasure – when movies are based on books. Below, I’ve listed out 10 of these, along with my recommendations when it comes to reading, watching, or both! 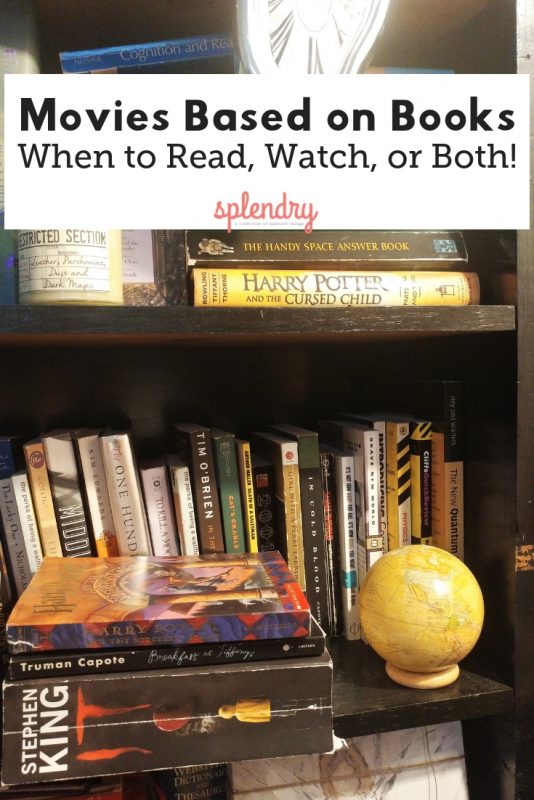 This year, Annihilation was released, starring Natalie Portman, Jennifer Jason Leigh, Gina Rodriguez, Tessa Thompson and Oscar Isaac. It told of a group of scientists who had to explore “The Shimmer” – a strange area where few had survived. This sci-fi thriller is actually based on the first book in Jeff Vandermeer’s Southern Reach Trilogy. The film may not be for everyone, and written works always have more details, details that can’t always be translated onto the big screen. Those who love a good fantasy and/or mystery may want to check this one out.

Read: A Wrinkle in Time

Another big film that came out this year was A Wrinkle in Time, based on the popular children’s book by Madeleine L’Engle. The movie had lots going for it, since it featured big names like Oprah Winfrey, Reese Witherspoon, Mindy Kaling, Zach Galifianakis and Chris Pine, but once again, it is hard to beat a book! This story is all about travelling through time and exploring new places…and that can be hard to convey through a movie.

Last year, a new take on Stephen King’s IT hit theaters, and a second one is already in the works. Bill Skarsgård pulled off a super creepy Pennywise the Clown, but for some fans, Tim Curry – who played this monster in the TV mini-series from 1990 – will always be Pennywise. Both versions brought the clown to life in a great way, though, and since the novel, mini-series and new film all feature different scenes and takes on things, we recommend taking them all in!

In 1968, Rosemary’s Baby came out, and it was based on the 1967 novel of the same name by Ira Levin. This horror story all about occult rituals is a classic, but once again, the book can’t be touched! It moves at a faster pace than the film and keeps audiences intrigued more than the movie version.

The Help featured actresses like Viola Davis, Emma Stone, Octavia Spencer, Bryce Dallas Howard, Jessica Chastain and Sissy Spacek, so the period drama film received a great deal of attention. This 2011 movie was actually based on a book from 2009, though, by Kathryn Stockett, and though it was full of talented stars and humorous moments, its main focus was to tell of a journalist who wanted to write a book from the point of view of maids who faced racism in 1963. This moving piece, brought to life on the big screen, was a true success!

Another rebooted film making current headlines is Jurassic Park. Universal Pictures and Amblin Entertainment bought the rights to this Michael Crichton book in 1990 – before it was even published! Then there was a 1993 film adaptation, along with The Lost World: Jurassic Park in 1997, Jurassic Park III in 2001, Jurassic World in 2015 and Jurassic World: Fallen Kingdom in June 2018. A sixth film, tentatively titled Jurassic World 3, is already set to come out on June 11, 2021.

Most people have seen – or at least heard of – Breakfast at Tiffany’s, in which Audrey Hepburn played Holly Golightly. This classic film is actually based on a novella by Truman Capote, though, which we highly recommend reading!

Obviously, if we are talking about films that spawned from writings, we have to mention the Harry Potter series. Not everyone is into magic and fantasy worlds, but these books truly are captivating, with twists and turns and delightful characters and scenes on every page. For those who still haven’t read them…Go! Now!

Read: The Sisterhood of the Traveling Pants

One of the most well-known novels out there is Emma by Jane Austen, which was published in 1815. Since then, this romantic story has been retold through movies, shows and plays…including Clueless. That’s right: This 1995 film starring Alicia Silverstone as Cher Horowitz is really a loose, modern adaptation of this classic novel!