You know those movies you see as a kid that are so exciting and magical that you hold them to a higher standard (even as an adult)? The original Jurassic Park was that movie for so many and to hear that they were introducing a new film to the franchise after all these years, well, that’s a tricky path to navigate! Not only do filmmakers have to compete with an audience now used to the latest and greatest in movie-making magic, they’ve got a legion of die-hard fans of the original film to cater to. 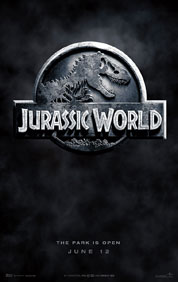 As a “regular” viewer of the Jurassic movies (I enjoyed Jurassic Park but don’t consider myself a true “fan” of the series), I can’t say I’ve been counting down the days to the premier, but I figured I’d see it since I’ve seen the others. And while I really enjoyed the first Jurassic Park, the follow ups weren’t exactly my favorite. (The only scene I remember from the second movie is the ridiculous takedown of dinosaurs using gymnastics. Google it.) I tagged along to a sneak peak showing of the new Jurassic World this week. I’ve got to say, I was pleasantly surprised!

Set on the same island as the first film, Jurassic World is now a bona fide theme park, complete with fast-pass line access to rides, restaurants and shopping, monorails, etc. The main difference in Jurassic World versus the old park is that now, dinosaurs are so common to humans, no one is impressed. Who wants to see boring ‘ol dinosaurs anymore? What’s left to do but design a new species of dinosaur that’s sure to terrify guests?! And terrify it does, as things (of course) go awry. The message remains that just because we can do things, doesn’t mean we necessarily should…

The human cast is fun to watch, with Bryce Dallas Howard and Chris Pratt acting as our heroes and charged with saving park guests, which include Howard’s character’s nephews, played by Nick Robinson and Ty Simpkins. As with all Jurassic movies, there’s plenty of comic relief, mostly in the form of Jake Johnson (Nick Miller on New Girl). While the movie has its predictable moments for sure, there’s enough action to keep you glued to the screen (and ready for the sure-to-come next film).

I will say that this was the most violent of the Jurassic series. Not gory or disturbing necessarily (for adults), but definitely more dinosaurs feasting on humans than seen in the past. It definitely earned its PG-13 rating so keep the little ones at home. (As someone who can’t handle much violence in movies, I did just fine with this one. It’s easy to know when to turn your head or close your eyes!)

Overall, Jurassic World was two hours of action and adventure that kept me interested and entertained (and never once looking at my watch). As for the die-hard fans? While nothing compares to seeing Jurassic Park as a ten year old kid, Jurassic World is a great attempt at bringing the same magic for an adult. Fans of the series are sure to be pleased.