37 shares
Chick Flick?
We’ve all heard the term. We all have that ONE movie that we think of whenever we hear that term. The movie website IMDb.com even has a a list of 100 chick flicks all girls must see and it starts off with some “oldies but goodies” like: Mean Girls (2004), where the famous line; “On Wednesdays we wear pink.” and other great girl quotes originated. Also on their list is Clueless (1995),  a great adaptation of the Jane Austin Book Emma and a must-see. Another great movie is Breakfast At Tiffany’s (1961), the epic story of Holly Golightly played by the lovely Audrey Hepburn and gives some of the best views of New York. Other amazing movies like Sweet Home Alabama, Little Women, Sixteen Candles, and Beaches. But for me, #53 on their list is one of MY go-tos when it comes to Chick Flicks: Steel Magnolias. 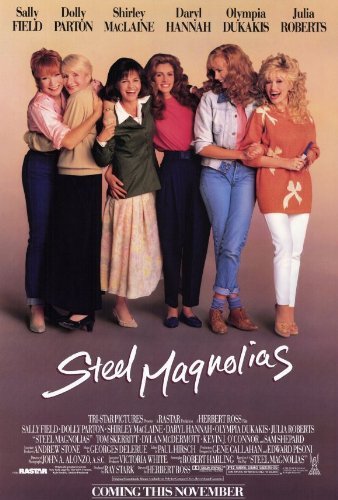 Steel Magnolias (1989)
Yes you read that right! I’d prefer a movie from the 80’s than a current movie, and here’s why:
First of all – I love it!
It’s so quotable, I find myself quoting it or applying quotes from it to real life!  And it’s relatable, there was even a quiz on Facebook to determine which of the six women you are most like. The women, who (in my opinion) set the bar high as far as any remakes or encore presentations are: Sally Field, Dolly Parton, Shirley MacLaine, Olympia Dukakis, Julia Roberts and Daryl Hannah. I know Lifetime did a remake of this for TV, but for me it was hard to watch as I had watched the original SO many times that when I heard one character say a line that I KNEW another character was SUPPOSE to say in the original, I HAD to turn it off.
Second it’s based on a true story.
The basis of the story is that Shelby, played by Julia Roberts, has a health concern that follows her all through the movie. The character, Shelby, has a episode in the beauty shop and it is true skill to see how Roberts chose to portray something she had no experience with. The story was written by one of Shelby’s real brothers about the friendship of these six women, how they support each other through the trials of life and how they dealt with difficult situations.
**I’m trying desperately to NOT give anything away if you have some how NOT seen this movie!** This “story” was actually a play that was made into a movie. The play has ONE scene as the entire thing takes place in the beauty shop, owned by Truvy (played by Dolly Parton in the movie). I actually saw the play put on in a community theater in Germany when my husband and I were stationed there. I had seen the movie probably 100 times so I was concerned as to how it would play out in ONE scene. I had no need for fear. But I did have a better appreciation for what they were able to do with the movie!
Third, and finally, I’m from the south so it just rings true in more ways than one.
Again, going back to it’s relatability, we have all known one (or all) of these women. We went to church with them, worked with them, met them in the bank, grocery store or were friends of older family members. My aunt has decided SHE is Ouiser Boudreaux (Pronounded Weeza Bood-row, played by Shirley MacLaine) the grouchy Old southern woman. And it fits her perfectly! She is constantly sending me emails titled “You got a reindeer up your butt?” and other such Ouiser quotes (that one is my favorite!)
If you somehow had overlooked this movie, due to age, or other people’s comments, I HIGHLY encourage you to take a second look! You’ll need some Kleenex for sure, but not for too long! It’s a great way to spend time alone or with friends.
What are your favorite chick flicks? Let me know what you think of Steel Magnolias, if you see it or see it again!
Click here to cancel reply.

I cry EVERY time.

It's been so long since I've seen this movie! Now I need to watch it again!