The age old debate: which is better, the book or the film? In my opinion books are always the better choice. But last night I was talking about this with my friends who were about to go see The Girl on the Train and it sparked a massive debate. The Girl on the Train is a book that was massively successful and the movie is proving to be just as popular. None of my friends going had read the book and I asked them whether they’d have preferred to read it before going, the group instantly divided into book lovers and book haters. 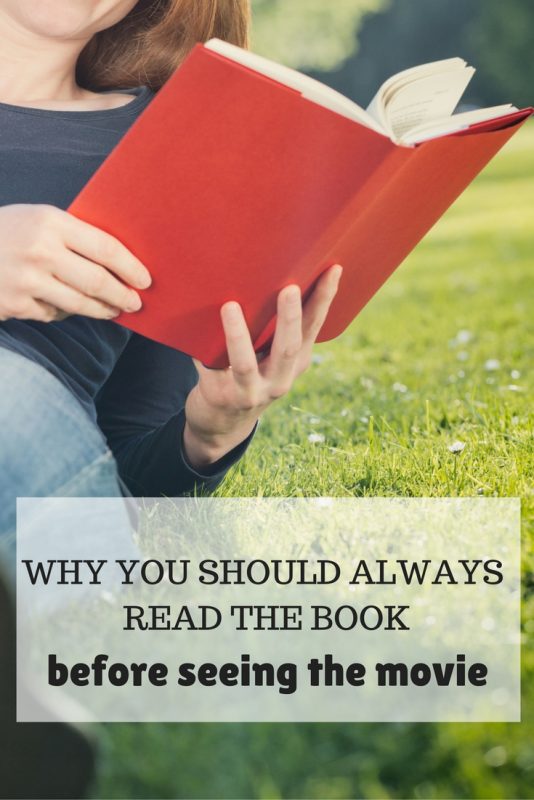 I believe you should always read the book before seeing the movie and here’s why:

1. You will be more aware of what’s going on.

This is especially true of sci-fi movies, where plots can get quite confusing. When reading the book you’ve already become immersed in the world and know it inside out. It saves a lot of time wondering things like how people are related, the rules of the magical worlds and following subplots. When a lot of your friends were wondering what the horcruxes meant in Harry Potter, you were happily munching popcorn, eagerly awaiting the next scene.

2. It doesn’t spoil the movie to know the ending; in fact it makes it better.

Although some movie adaption of books differ from the book ending, for the most part the story line is followed to a T. You’d think this would make the movie boring, knowing what’s going to happen but you’re wrong. You’ve spent hours alone in your room reading the book and falling in love with the characters and now here it is on screen, come to life and there’s something magical about that. As well as the fact that what was once a visual movie you played in your own head as you read is now something that is being watched and admired by countless people as it plays across the big screen.

3. The movie can clear up any facts you got wrong in the books.

Maybe you pictured someone described as a giant as being 20ft tall when in fact they’re only 7ft or maybe you repeatedly read a name wrong in your head. When I was reading Harry Potter for the first time I pronounced Sirius Black’s name as Serious. I was highly embarrassed when the movie came out and I realised my mistake, but was relieved that I was corrected.

4. The movie usually strives to be true to the book.

Some people will argue that seeing the movie will ruin whatever little world you have built up in your head. But mostly directors will work with the author of the book and use the book to ensure they try to project the world that people were invited into reading the book. You’d be surprised by how much effort goes into making sure even the tiniest of details from the books are shown in the movies. At the same time book lovers are lenient and realise that not everything can be like the books, if a character has a different hair colour or they write an unnecessary character out of the plot we’re not going to have a meltdown.

5. Books are quite lonely and movies can be enjoyed together.

It is great sharing your favourite book with your friends. You read something you think is great and can’t wait for them to have the same experience as you. So you lend it to them and spend a few days or weeks (depending on their reading speed) waiting for them to finish so you can talk about it. Then you meet up and both agree that her ex boyfriend was a creep or you’d both love to live on the island in the book and then you go about your day.

But watching movies is something you can do together and there’s nothing better than the excitement building when you and your best friend are waiting to see a movie of a book you both absolutely loved. It’s a whole experience, seeing the trailer, the build up to the movie release, watching it together, commenting on it and discussing it after.

What’s your opinion? Do you agree that you should always read the book before seeing the movie?

Nope! I always find that the movie disappoints me if I have read the book first. Movies rarely live up to the book. I would rather read the book after !

I always try and read the book before I see the movie. I've always been more of a reader than a movie watcher but when a movie comes out for a book that I like, I can't help myself and I just have to watch it and see what's the same or different.

I love this! I am also for reading the book before seeing the movie. The movie makes the book come to life. :)

I always try to read the book before seeing the movie! Sadly, not all the book-based movies are true to the novels.

Yes! This is funny actually because I just picked up Girl On The Train so that I can read it before watching the movie too! So far, I'm loving it and I can't wait to see the movie! What did you think of the book?