So I might possibly be a somewhat avid follower of the British Royal Family. I mean it’s not like I bought a commemorative royal wedding tea towel or anything, oh wait I did. I definitely did NOT type up a list of possible royal baby names to see if I would guess correctly because that would be crazy….and I absolutely, positively, do NOT own the royal wedding on DVD.

I am somewhat familiar with this topic is what I am saying. 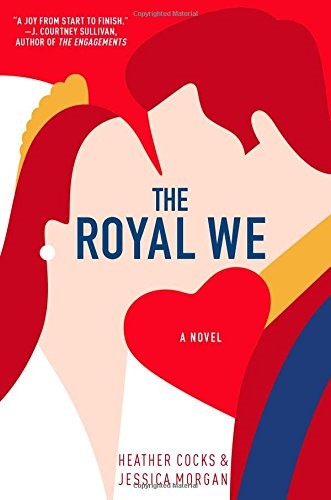 Just in time for the new royal baby comes The Royal We by Heather Cocks & Jessica Morgan of blogging fame. It’s the perfect treat for people who like their chick lit with a British accent. This is the story of a prince named Nick who falls in love with a commoner named Bex. Nick has a red-headed fun loving brother named Freddie, they fall in love at college, and they are preparing for the wedding of the century at Westminster Abbey. Sound familiar?

Heather and Jessica do a great job of using Will and Kate’s romance as a template but really making this story their own. While I am pretty sure Will and Kate weren’t quite as scandalous as Nick and Bex; it’s fun to imagine all the behind-the-palace-walls drama we will never get to hear about. The writing is hilarious, but also surprisingly moving, I got a little misty-eyed more than once.

Definitely buying this today. And I love your "appreciation" of the royal family! Do you have any guesses as to the new baby's name?

Um of course I do. Charlotte, Alice, or Alexandra for a girl. Arthur, James, or Henry for a boy. I will be wrong.