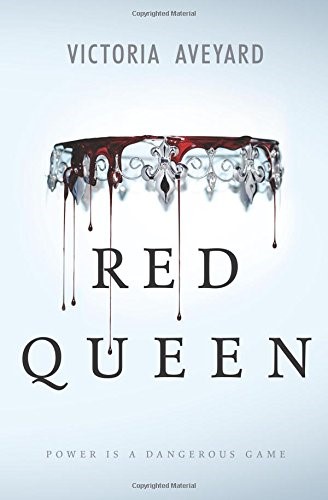 I don’t know about you but after The Hunger Games, Divergent etc., I had to take a break from YA dystopia for a little while. Whenever one book gets popular they rush to publish 50 more just like it. I would start a series that was actually pretty good but I just could not get into it because there were too many similarities to what I’d read before. I think I’ve taken a long enough break because I really enjoyed Red Queen by Victoria Aveyard.

Mare Barrow’s world is ruled by the Silvers, a reserved, pale bunch, with all manner of special powers (think X-men). The Silvers are served by the Reds, named for the color of their blood, (hence the Carrie cover). The Reds have no special abilities and are destined to serve as laborers and foot soldiers in the Silvers never-ending war against rival states. Mare expects to turn 18 and be sent to the front like all of her brothers. But Mare is about to find out that she isn’t like the rest of the Reds after all.

Red Queen has the traditional dystopian set up of a post-apocalyptic world with a subjugated under-class, and of course a love triangle. The political intrigue and supernatural abilities of the Silvers make for an interesting twist on a familiar genre. I don’t know if the author intended to echo the Biblical story of Esther, but it definitely sprang to my mind more than once. This was a fun summer read that kept me guessing until the end.