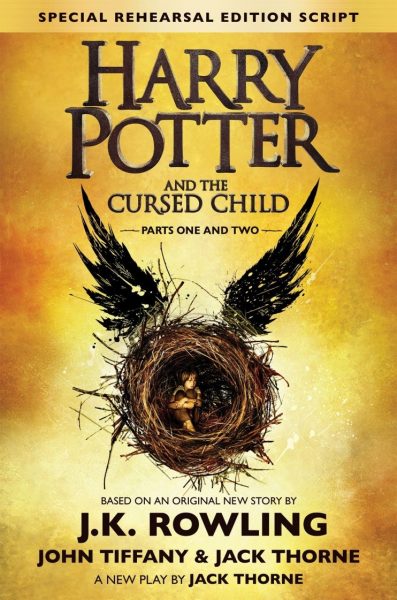 o spoiler alert, the original Harry Potter series ends with the words “All was well.” Well psych, Harry is in his 40s now and his son is causing PROBLEMS.

The first thing you need to get about Harry Potter and the Cursed Child is that it is not a book. A published script of a play is very different from a novel. It reads differently and you get none of the nuance from the performances of the actors. Also J.K. Rowling did not write this alone, she collaborated with two playwrights so the voice is a bit different. Most of the complaints I’ve seen about the “book” seem to be ignoring the fact that it isn’t a book at all. That being said, I went in with pretty low expectations and the idea that I would consider this to be separate from the “official” Potter universe.

I am admittedly a Harry Potter apologist but I actually really appreciated the story. I liked that Harry, Ginny, Ron and Hermione are real adults struggling with marriages and parenting. Also a huge bonus is that maybe people who only saw the movies will see the play and see what an awesome character Ginny is in the books! Because she is um, slightly less awesome in the movies.

I ended up enjoying Harry Potter and the Cursed Child and I am very much wanting to see it performed on the stage as it was intended. The images I have seen from the play look incredible, and the reviews are stellar. But since most of us probably won’t be able to run off to London or New York to see it in person the script is the best we can experience for now.

I thought the cursed child was very well done and can only imagine how awesome it would be on the stage! I do wish JK rowling would of made the book first. I just love her writing!

Just read this too! Thanks for sharing :)