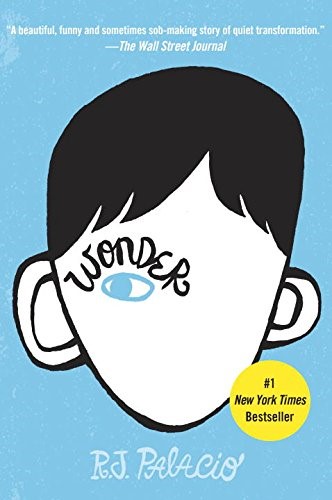 “It is only with one’s heart that one can see clearly. What is essential is invisible to the eye.” From The Little Prince by Antoine de Saint-Exupéry

I think if I could force every middle-schooler and their parents to read one book it would be Wonder by R.J. Palacio.

Auggie is a smart little boy who loves Star Wars, his family, and his dog. Auggie was also born with a pronounced facial difference. He never describes his face in detail in the book, except to say that whatever you are imagining, the reality is probably worse.  Countless surgeries have required Auggie to be homeschooled by his mother. But now it’s time for Auggie to start school with other kids, just in time for middle school.

It won’t come as a surprise to you that Auggie doesn’t have the easiest transition; other kids (and even their parents) can be cruel. Every kid feels like an outcast in middle school. For Auggie, that feeling is validated, people don’t want to look at him and go out of their way not to touch him. While the story is incredibly heartbreaking (I cried through about 75% of this book) it is also full of humor and hope. You cannot read this without thinking about the ways you have reacted to people who are different and how you can do better.

Pick up this book, you won’t be able to put it down and it will stay with you for a long, long time.

I loved the different viewpoints. I also read the 3 Wonder short stories (Shingaling, Pluto, Julian Chapter) and cried my way through those. As a parent of a middle schooler, and someone who works part time in a school, these books have changed the way I think about students and their situations. There's always more than we see on the surface.