When I asked my (now five year old) daughter what kind of birthday party she wanted this year I was not surprised when she quickly answered, “Trolls!”. And after going to a few party supply stores, I’m fairly certain that was the same answer many other kids gave their parents too.

The Trolls party supplies were in demand, which meant I needed to get creative to make this party happen. Thankfully the internet had some ideas that gave me a good start. I had a few main ideas to go with; rainbow, pink and glitter. 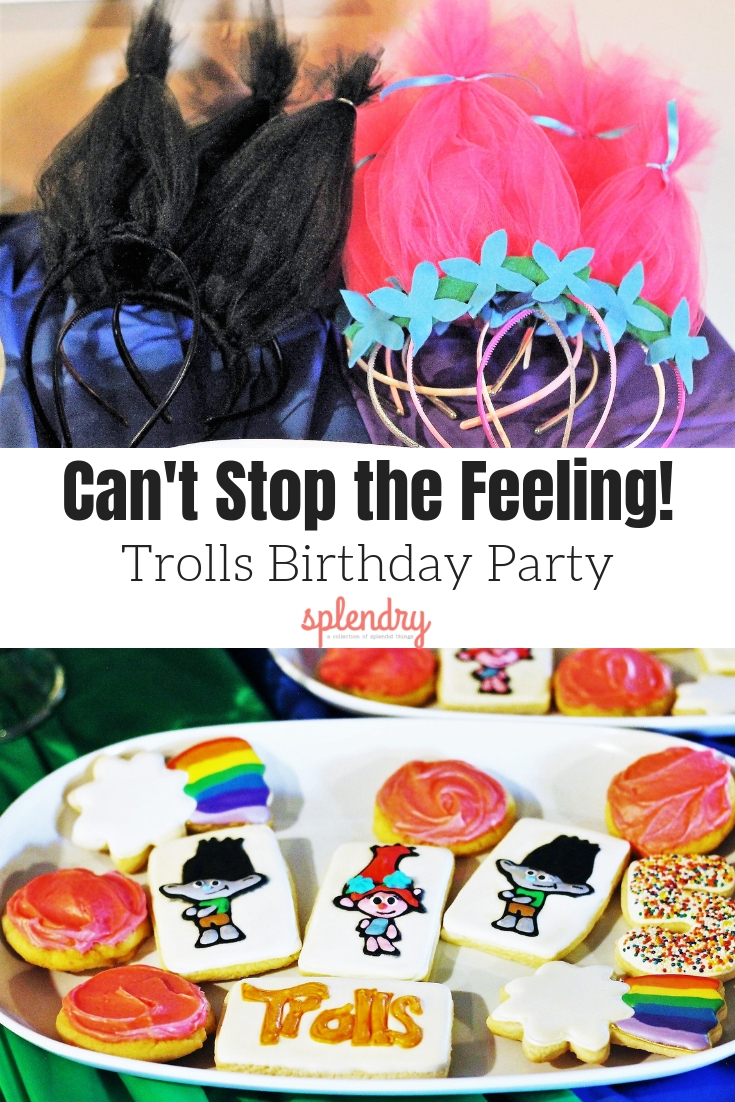 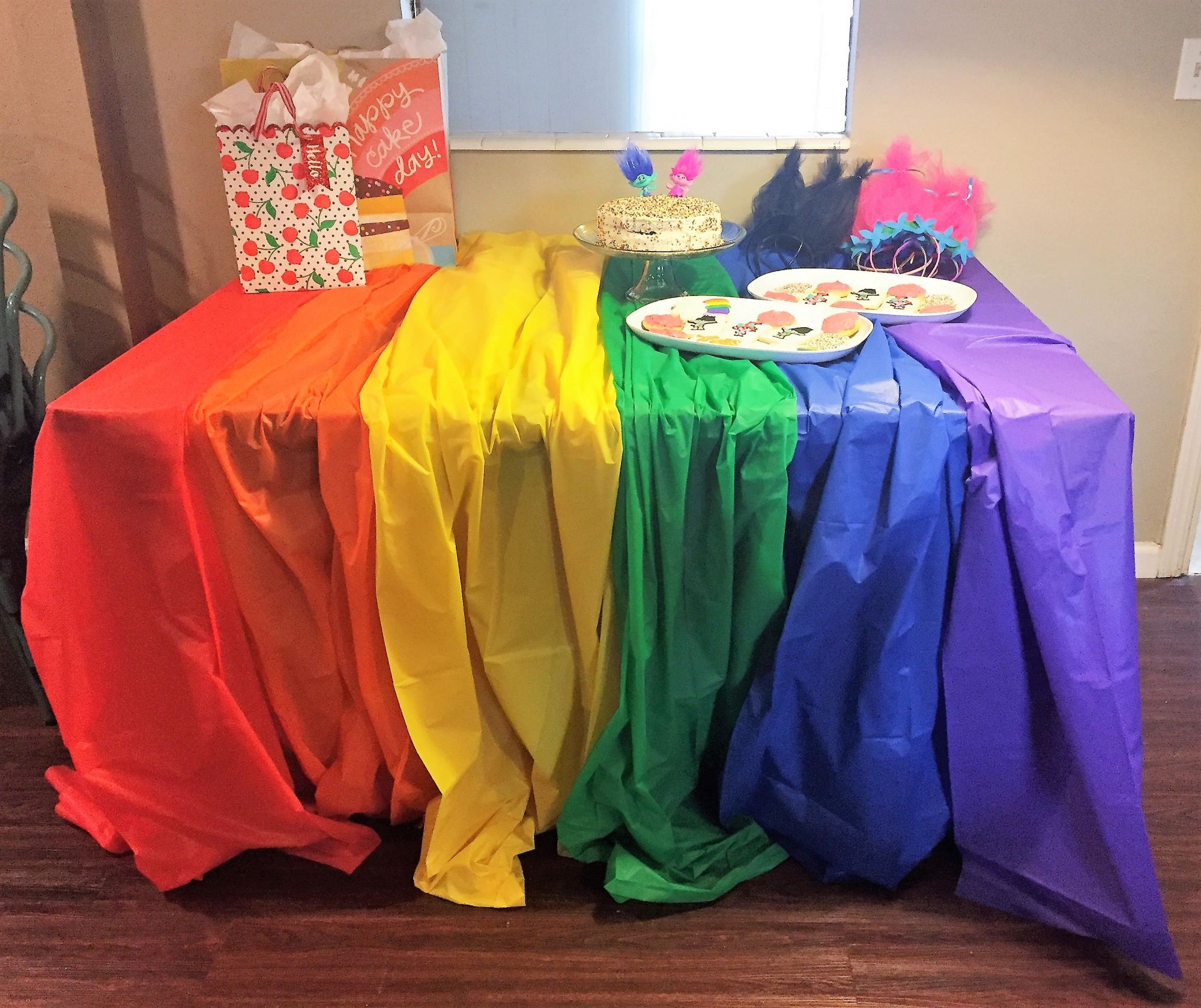 I started out creating a rainbow with 6 different colored plastic table cloths (red, orange, yellow, green, blue and purple). I put them on the table long ways so they draped over one another and created the rainbow look I was going for. 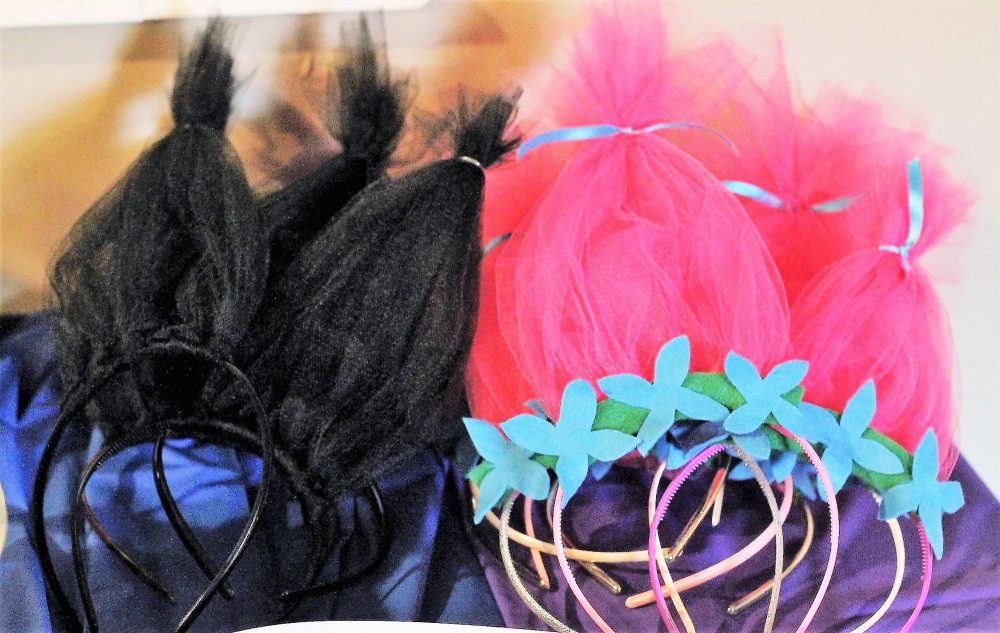 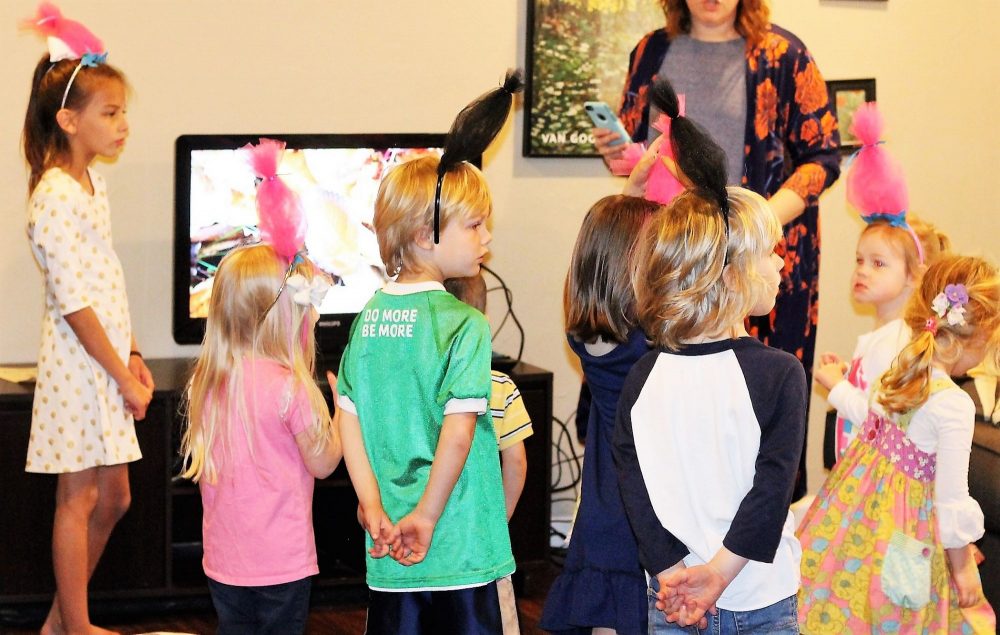 Next I made Princess Poppy and Branch hair headbands for the kids to wear during the party, then take home. These were slightly time consuming, but oh so worth it! You’ll need:

Cut the tulle into pieces, about 18-20” in length, six to eight per headband, depending how full you want them to be. Then you just tie the tulle on, there are lots of ways to do this!

Once you have the pink tulle tied on to the headband, gather the top and tie it with the blue ribbon. I freehand cut out the felt flowers, but using a template might be a good idea! Three flowers per headband for me.

The Branch headbands were so simple, just cut the tulle, tie (or use a little rubber band like I did) and voila! You’re done! 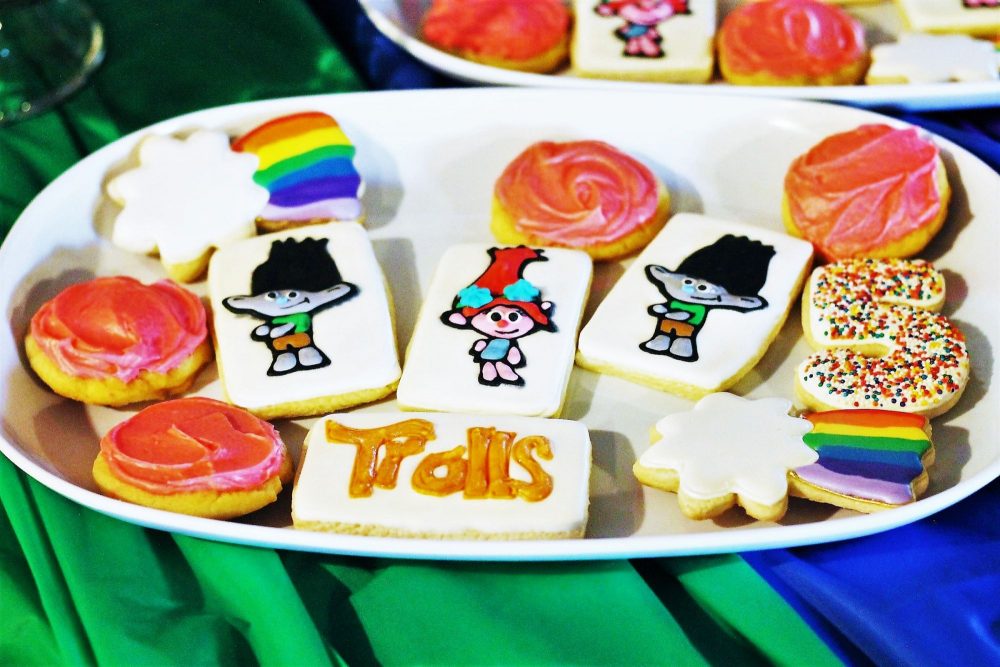 Since I went all out for the cookies, I kept it simple for the cake (thank you Betty Crocker!). A simple two layer chocolate cake with buttercream frosting and LOTS of sprinkles. I had a hard time finding Trolls cake toppers, so I got these cute little toys at Target. Bonus, my girl got them as an extra present at the end of the party! 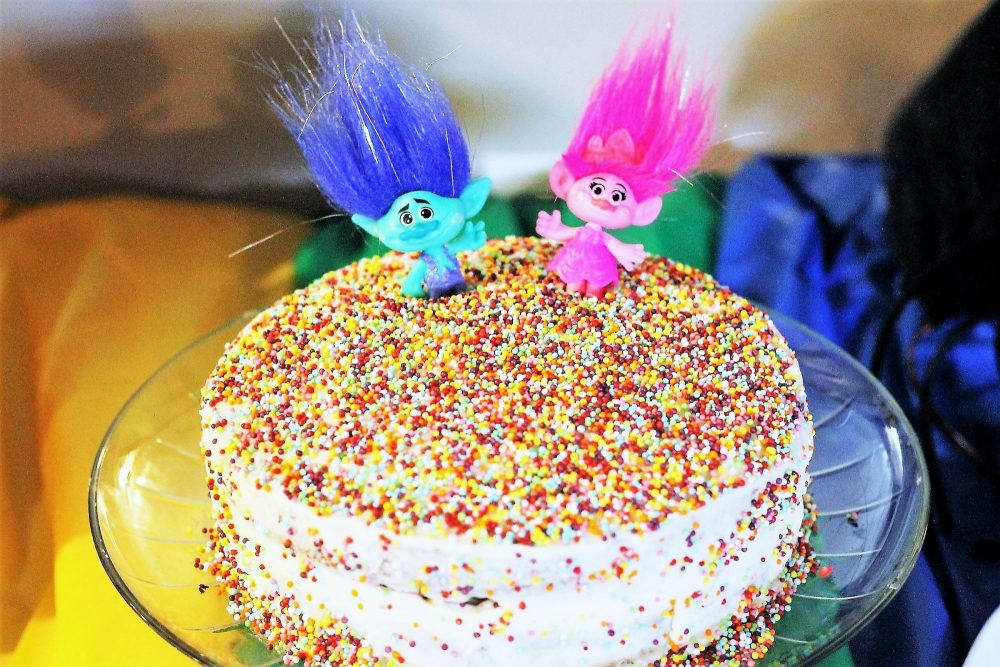 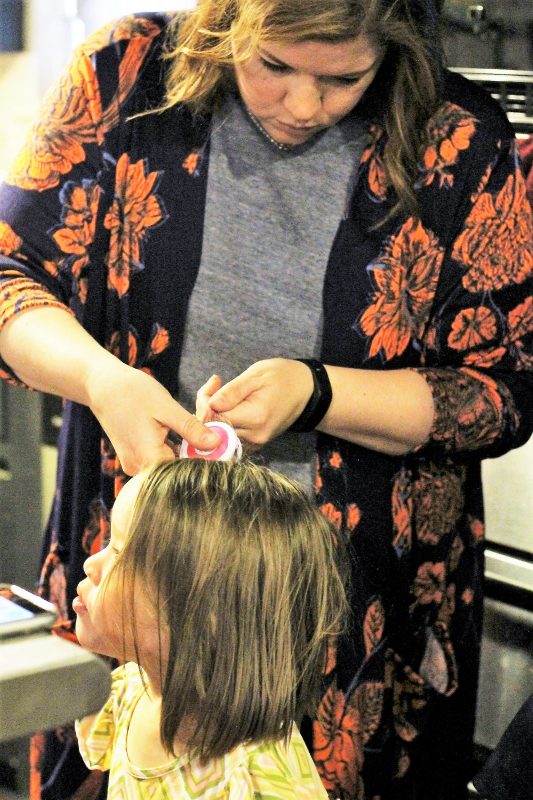 I bought some hair chalk from Walmart and we gave the kids some crazy Troll hair. Then it was time for some party games. 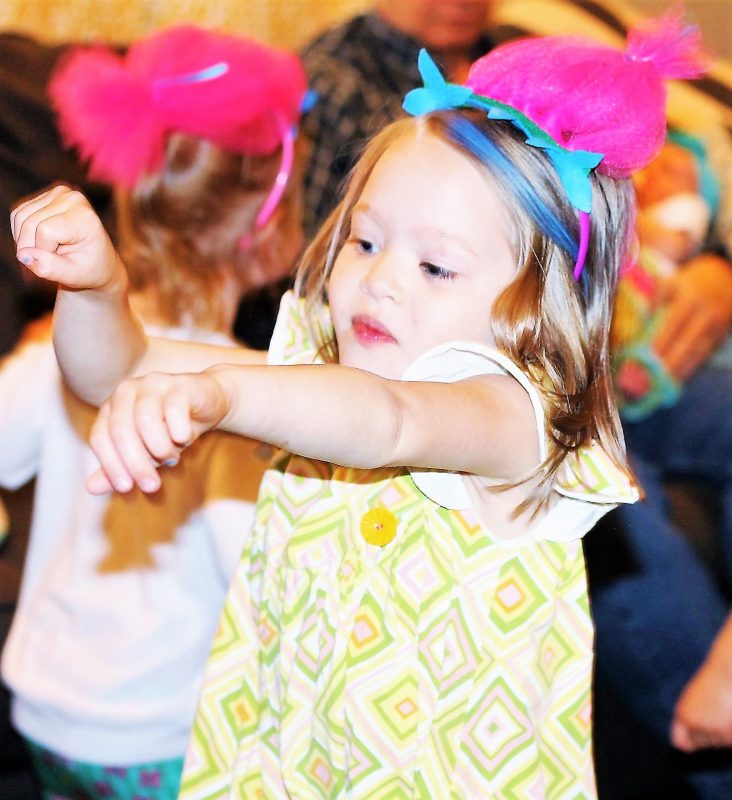 We played Freeze Dance to the Trolls soundtrack and the kids had a blast! I gave out prizes (just a few things I picked up at our local Five Below) to the kids who had the craziest freeze positions. 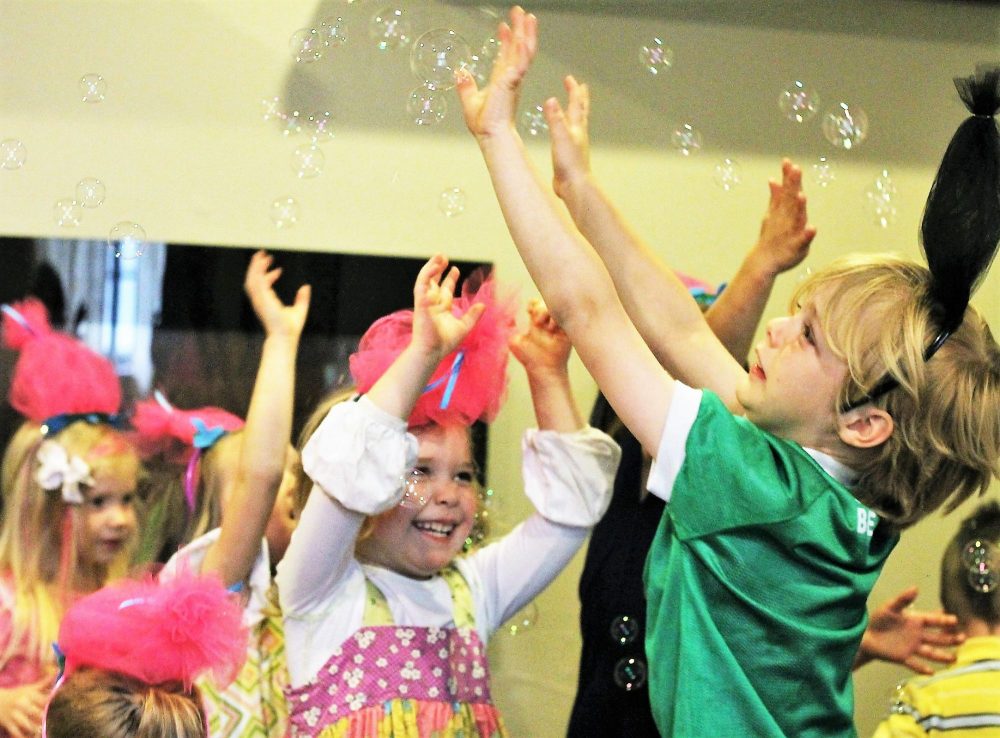 Then we got out the bubble machine. Now, I wish this one had been done outdoors, but like I said before, it was too cold. You do what you’ve gotta do. So we played Poppy’s Bubble Popping game in the living room! There was bubble residue everywhere, but the kids absolutely had the best time popping bubbles all over the house!

Nothing extravagant, nothing too difficult to prepare! Low stress was my mantra for this year’s party planning and it was everything I hoped for, and I think my five year old would agree. 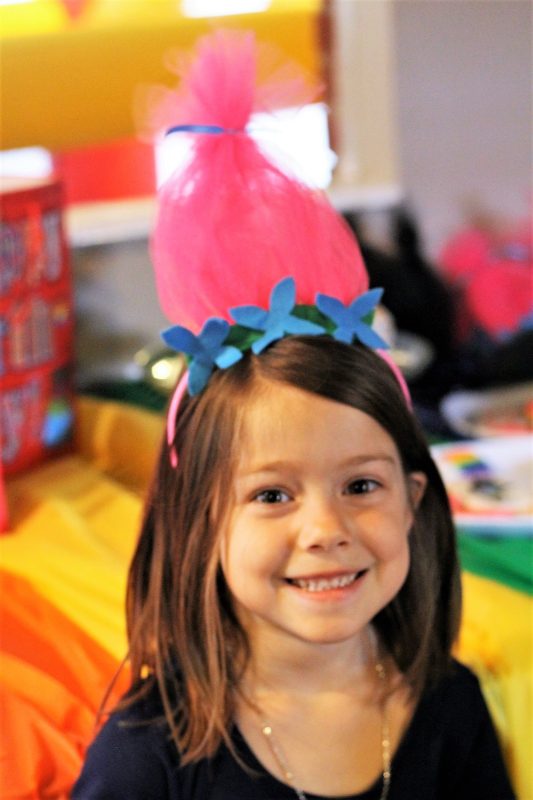