Out of the seven million things I’ve “pinned” on Pinterest  about how many of those recipes and projects have I actually attempted? Maybe 20? That may be generous. Who has time to actually make that stuff, right? I finally attempted a variation on one little DIY I had re-pinned a few times and was really happy with the results! I’m now crazy about these quick and easy DIY Pore Strips!

You’ve seen pore strips in stores, and maybe even bought them before. I remember when these first came out, it was such a big deal! Finally, something to get rid of blackheads! And the fact that you could actually see what you were removing was both disgusting and exhilarating.

And now, instead of shelling out $10 a box, I can make DIY pore strips at home using just two ingredients! Yep. Two. All you need is a box of gelatin (unflavored) and some milk. 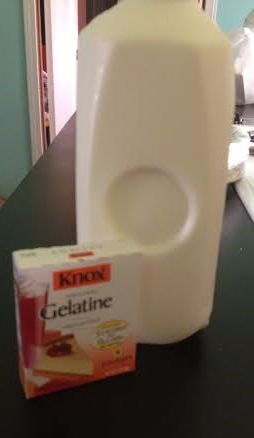 Just a little tip: Do NOT get the gel too close to your eyebrows. Let’s just say the last time I had my makeup done, the lady doing it said, “Did you know that one eyebrow has a much higher arch than the other?” Yes, yes I did.

Now sit back and enjoy your soft skin. Just watch out for those eyebrows.